UK apologises for racism in memorials to WWI dead 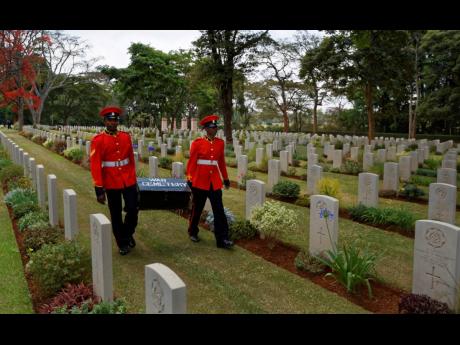 AP
In this Sunday, Nov. 13, 2016 file photo, two members of Kenya’s Military Police walk past graves as they leave after attending a Remembrance Sunday event, to honour the contribution of those British and Commonwealth military who died in the two World Wars and later conflicts, at the Nairobi War Cemetery in Kenya.

British authorities apologised Thursday after an investigation found that at least 161,000 mostly African and Indian military service personnel who died during World War I were not properly honoured due to “pervasive racism”. It said that that number could possibly range up to 350,000.

The investigation found that those service members were either not commemorated by name or weren’t commemorated at all, according to a report commissioned by the Commonwealth War Graves Commission. Between 45,000 and 54,000 other casualties were “commemorated unequally”.

The treatment of these soldiers, who served in Africa, Asia, and the Middle East, contrasts with that of the men and women who died in Europe. It also violates the principle that all war dead should be remembered in the same way because they all made the same enormous sacrifice.

“On behalf of the Commonwealth War Graves Commission and the government, both of the time and today, I want to apologise for the failures to live up to their founding principles all those years ago and express deep regret that it has taken so long to rectify the situation,” Defense Secretary Ben Wallace said in the House of Commons. “Whilst we can’t change the past, we can make amends and take action.”

The commission appointed an independent panel to investigate claims of unequal treatment following a 2019 TV documentary presented by David Lammy, a lawmaker from the opposition Labour Party, that focused on the way African casualties were commemorated. One researcher who worked on the documentary said she had forwarded information about her concerns to the commission more than a decade earlier, but no action was taken.