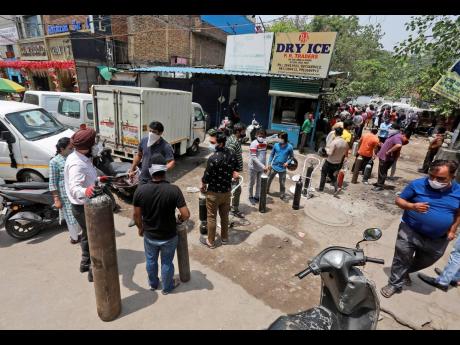 AP
People stand in a queue to refill oxygen in cylinders in New Delhi, India yesterday. India put oxygen tankers on special express trains as major hospitals in New Delhi on Friday begged on social media for more supplies to save COVID-19 patients who are struggling to breathe.

India put oxygen tankers on special express trains as major hospitals in New Delhi begged on social media on Friday for more supplies to save COVID-19 patients who are struggling to breathe. More than a dozen people died when an oxygen-fed fire ripped through a coronavirus ward in a populous western state.

India has confirmed 16 million cases so far, second only to the United States in a country of nearly 1.4 billion people. India has recorded 2,263 deaths in the past 24 hours for a total of 186,920.

A major private hospital chain in the capital, Max Hospital, tweeted that one of its facilities had one hour’s oxygen supply in its system and had been waiting for replenishment since early morning. Two days earlier, they had filed a petition in the Delhi High Court saying they were running out of oxygen, endangering the lives of 400 patients, of which 262 were being treated for COVID-19.

The government started running Oxygen Express trains with tankers to meet the shortage at hospitals, Railroad Minister Piyush Goyal said. The air force also airlifted oxygen tanks and other equipment to areas where they were needed, and flew doctors and nurses to New Delhi, the government said.

“We have surplus oxygen at plants which are far off from places where it is needed right now. Trucking oxygen is a challenge from these plants,” said Saket Tiku, president of the All India Industrial Gases Manufacturers Association. “We have ramped up the production as oxygen consumption is rising through the roof. But we have limitations and the biggest challenge right now is transporting it to where its urgently needed. ”

The Press Trust of India news agency said the defense ministry will fly 23 mobile oxygen-generating plants from Germany to help with the shortage. Each plant will be able to produce 2,400 liters of oxygen per hour, it said.