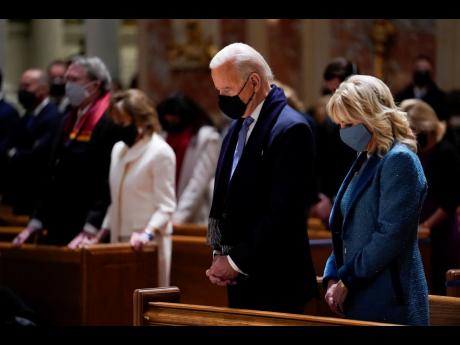 AP
In this January 2021 file photo, President-elect Joe Biden and his wife, Jill Biden, attend Mass at the Cathedral of St Matthew the Apostle during Inauguration Day ceremonies in Washington. When US Catholic bishops hold their next national meeting in June 2021, they’ll be deciding whether to send a tougher-than-ever message to President Joe Biden and other Catholic politicians: Don’t partake of Communion if you persist in public advocacy of abortion rights.

When US Catholic bishops hold their next national meeting in June, they’ll be deciding whether to send a tougher-than-ever message to President Joe Biden and other Catholic politicians: Don’t receive Communion if you persist in public advocacy of abortion rights.

At issue is a document that will be prepared for the US Conference of Catholic Bishops (USCCB) by its Committee on Doctrine, with the aim of clarifying the church’s stance on an issue that has repeatedly vexed the bishops in recent decades. It’s taken on new urgency now, in the eyes of many bishops, because Biden – only the second Catholic president – is the first to hold that office while espousing clear-cut support for abortion rights.

Such a stance, by a public figure, is “a grave moral evil,” according to Archbishop Joseph Naumann of Kansas City, Kansas, who chairs the USCCB’s Committee on Pro-Life Activities and believes it’s necessary to publicly rebuke Biden on the issue.

“Because President Biden is Catholic, it presents a unique problem for us,” Naumann told The Associated Press. “It can create confusion ... . How can he say he’s a devout Catholic and he’s doing these things that are contrary to the church’s teaching?”

The document, if approved, would make clear the USCCB’s view that Biden and other Catholic public figures with similar viewpoints should not present themselves for Communion, Naumann said.

In accordance with existing USCCB policy, it would still leave decisions on withholding Communion up to individual bishops. In Biden’s case, the top prelates of the jurisdictions where he frequently worships – Bishop W. Francis Malooly of Wilmington, Delaware, and Cardinal Wilton Gregory of Washington, DC – have made clear that Biden is welcome to receive Communion at churches they oversee.

The document-in-the-works results from a decision in November by the USCCB’s president, Archbishop José Gomez of Los Angeles, to form a working group to address the “complex and difficult situation” posed by Biden’s stances on abortion and other issues that differ from official church teaching. Before disbanding, the group proposed the drafting of a new document addressing the issue of Communion — a project assigned to the doctrine committee.