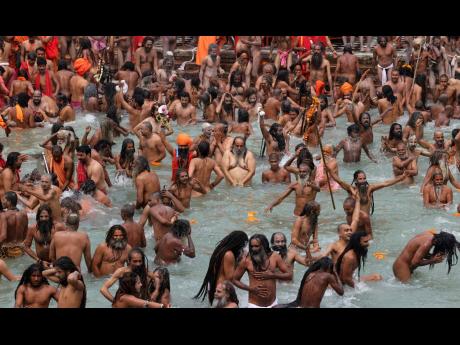 AP
Devotees take holy dips in the Ganges River during Kumbh Mela, or pitcher festival, one of the most sacred pilgrimages in Hinduism, in Haridwar, northern state of Uttarakhand, India, on April 12. 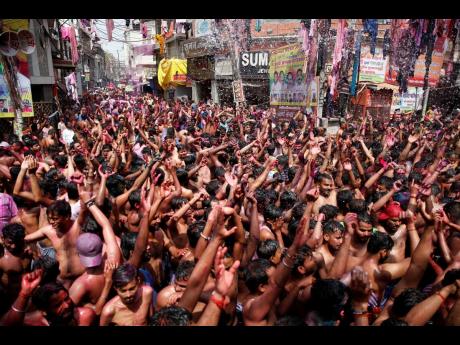 AP
In this March 29 photo, Indians, their faces smeared with colour and glitter, dance as water is sprinkled on them during Holi celebrations in Prayagraj, India. (AP)
1
2

India’s death toll from COVID-19 has surpassed 200,000 as a virus surge sweeps the country, rooted in so-called super-spreader events that were allowed to happen in the months after India thought it had the pandemic under control.

Now India is enduring its darkest chapter yet, with mass funeral pyres, burials and a collapse of the health system compounded by shortages of oxygen, ventilators, and hospital beds.

Fuelling the catastrophe were a series of crowded events, like mass rallies by politicians such as Prime Minister Narendra Modi, religious holidays and pilgrimages on the River Ganges, where people relaxed their vigilance and didn’t wear masks or keep their social distance.

The health ministry on Wednesday reported 3,293 deaths in the last four hours, bringing India’s total fatalities to 201,187. The deaths and the confirmed cases of 17.9 million are thought to be undercounts.

Now the surge is sending its health system towards collapse. Hospitalisations and deaths have reached record highs. Patients are suffocating because hospitals are using up their oxygen supplies. Fires at overwhelmed crematoriums are lighting up night skies.