AstraZeneca delays filing for US authorization of COVID shot 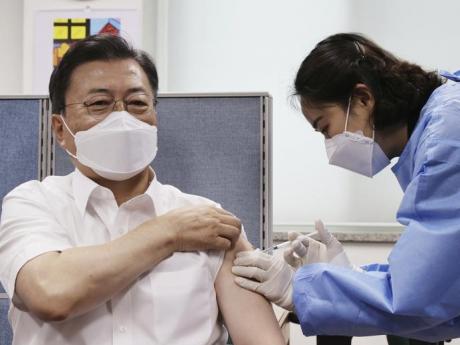 LONDON (AP) — AstraZeneca said Friday that it intends to seek US authorisation for its COVID-19 vaccine in the “coming weeks,” acknowledging a delay in the much-anticipated filing that had been expected by mid-April.

The Anglo-Swedish drugmaker revealed the new timetable as it released first-quarter financial results, which showed that the company delivered 68 million doses of the vaccine to the UK, European Union, and other countries in the first three months of the year.

The company said it was continuing to work on its application to the US Food and Drug Administration, noting the “substantial size of the file” that will include data from US trials as well all other studies completed so far and real-world data collected from use of the vaccine in other countries.

Among the issues that will likely be addressed are indications that the vaccine is linked to rare blood clots, particularly in younger people.

Several countries have recommended that the shot be given only to older people because of the potential side effect.

When AstraZeneca released data from its US vaccine trial on March 22, company officials said they expected to apply for FDA authorisation in the first half of April.

Once the application is filed, an FDA advisory committee will publicly debate the evidence behind the shots before the agency decides whether to allow emergency use.

Ruud Dobber, an AstraZeneca executive vice president, said at the time that if the FDA authorises the vaccine, the company would deliver 30 million doses immediately, followed by another 20 million within the first month.

The White House said earlier this week that the US would begin sharing its entire stock of AstraZeneca vaccine with the world once it clears federal safety reviews, with as many as 60 million doses expected to be available for export in the coming months.

The move expands on the Biden administration's March decision to share about 4 million doses of the vaccine with Mexico and Canada.

The White House is feeling increasingly confident about the supply of the three vaccines already being administered in the US — Pfizer, Moderna, and Johnson & Johnson.

The US has also been under mounting pressure to share more of its vaccine supply with the world, as infection rates surge in countries like India and other countries struggle to get enough doses to protect their most vulnerable residents.

More than half of US adults have received at least one dose of vaccine, and the government expects to have enough supply for the entire population by early summer.

AstraZeneca reported revenue of $275 million from deliveries of 68 million doses of the vaccine during the first quarter.

AstraZeneca has pledged that it will deliver the vaccine on a non-profit basis as long as the pandemic lasts.

The company said 30 million doses went to the EU, 26 million to the UK, 7 million to Gavi, an alliance that secures vaccines for low-income countries, and five million to other nations.

To date, AstraZeneca and partners such as the Serum Institute of India and Fiocruz in Brazil have supplied more than 300 million COVID-19 vaccine doses to over 165 countries, the Anglo-Swedish drugmaker said.

The vaccine was developed by researchers at Oxford University, who licensed the technology to AstraZeneca in an effort to tap into the company's global manufacturing and distribution capacity.

AstraZeneca in turn authorises other companies to produce the shots around the world.