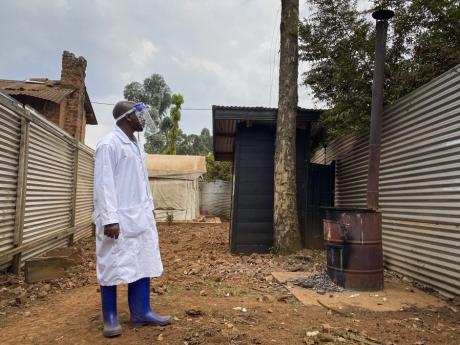 A medical worker checks the quarantine area of the Matanda Hospital in Butembo, where the first case of Ebola died, in the North Kivu province of Congo Thursday, February 11, 2021. (AP Photo/Al-hadji Kudra Maliro)

KINSHASA, Congo (AP) — Congo has declared an end to the latest Ebola outbreak that killed six people in its east.

Congo's Minister of Public Health, Dr Jean-Jacques Mbungani, on Monday announced the end of the outbreak that began February  7 in the town of Butembo in the North Kivu province.

The World Health Organization (WHO) also confirmed the end to the outbreak, congratulating Congo on combatting it within three months.

There were 12 cases of Ebola, with six deaths and six recoveries in four health zones in the North Kivu province, according to WHO.

The last two patients had been discharged from the Ebola Treatment Center of Katwa in Butembo on March 24.

This was the 12th Ebola outbreak in conflict-ridden Congo since the virus was first discovered in the country in 1976, and the third to hit the country in less than a year.

Its onset came less than three months after Congo's 11th outbreak in the western province of Equateur officially ended in November.

A 2018 outbreak in Eastern Congo was the second deadliest in the world, killing 2,299 people before it was ended in June.

That outbreak lasted for nearly two years and was fought amid unprecedented challenges, including entrenched conflict between armed groups, the world's largest measles epidemic, and the spread of COVID-19.