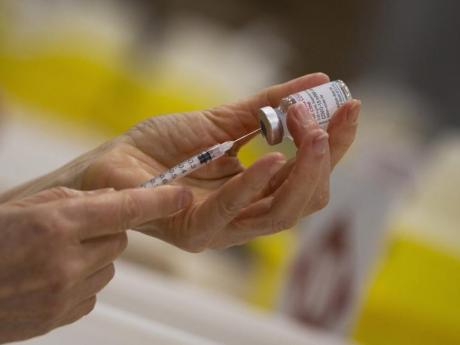 In this file photo dated Wednesday, April 14, 2021, a pharmacist fills a syringe from a vial of the Moderna COVID-19 vaccine in Antwerp, Belgium.(AP Photo/Virginia Mayo, FILE)

GENEVA (AP) — United States biotech company Moderna will provide up to 500 million doses for the World Health Organization-backed programme to ship coronavirus vaccines to needy people in low and middle-income countries, but shipments won't begin until the fourth quarter, the company and programme leaders said Monday.

The advance purchase agreement from Gavi, the Vaccine Alliance, comes just days after the World Health Organization announced emergency approval of the Moderna vaccine that paves the way for its inclusion in the WHO-backed COVAX programme.

Gavi, a Geneva-based public-private partnership, has been scrambling to try to strike deals with vaccine makers at the same time as trying to persuade rich countries that have secured millions of doses — some of which they aren't even using — to donate them to poorer ones.

Moderna has already struck and been delivering on, supply agreements with many rich countries, which have received millions of doses of its vaccine.

WHO has repeatedly decried a lack of equity in access to COVID-19 vaccines.

The rollout of Moderna vaccines for COVAX isn't set to begin until the fourth quarter of this year, and the vast majority of the doses in the deal — 466 million — are planned for next year.

The remaining 34 million are expected this year.

Stephane Bancel, the Moderna CEO, expressed support for the COVAX mission and called the deal “an important milestone” to ensure access to its vaccine worldwide.

“We recognise that many countries have limited resources to access COVID-19 vaccines,” Bancel said in a statement. “We remain committed to doing everything that we can to ending this ongoing pandemic with our mRNA COVID-19 vaccine.”

The company said the doses were offered “at Moderna's lowest tiered price, in line with the company's global access commitments,” without specifying.

Gavi didn't provide financial terms but has said the per-dose prices of vaccines for COVAX will eventually be made public.

Many experts say the COVID-19 crisis is acute now, with India, in particular, facing an unprecedented surge in cases.

The Moderna vaccine has generally been considered among the most effective so far in combating new variants like the one that is spreading in India.