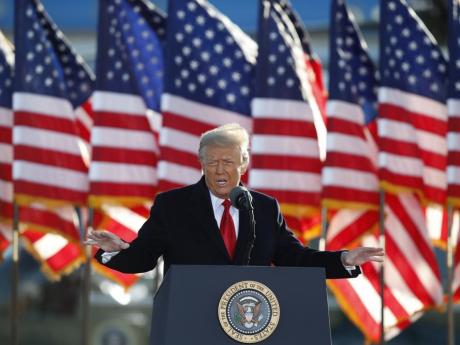 The social network's quasi-independent Oversight Board voted to uphold his ban from the platform after his account was suspended four months ago for inciting violence that led to the deadly January 6 Capitol riot.

But in a statement, it faulted Facebook for the way it made the decision and called its “indefinite” suspension of Trump unreasonable and unworkable.

The board said Facebook sought to avoid its responsibilities by applying “a vague, standardless penalty” and then referring the case to the board to resolve.

“Indefinite penalties of this sort do not pass the international smell test,” oversight board co-chair Michael McConnell said in a conference call with reporters.

“We are not cops, reigning over the realm of social media.”

“We love you. You're very special,” he said to the rioters in the first post. In the second, he called them “great patriots” and told them to “remember this day forever.”

Those violated Facebook's rules against praising or supporting people engaged in violence, the board said.

Helle Thorning-Schmidt, a former Danish prime minister who sits on the board, said in the call that Facebook shirked its responsibility to enforce its own rules.

“Facebook should either permanently disable Trump's account or impose a suspension for a specific period of time,” she said.

Thorning-Schmidt said Facebook can't just invent “new unwritten rules” for special users when it suits the company while everybody else has to follow their standards.

“They did get it right, but they can't have a penalty that's indeterminate because that's not in their own rules,” she said.

Reaction from Trump allies was swift.

Meadows said the decision increases the odds of government action against Big Tech.

“Break them up,” tweeted Representative Jim Jordan, a close Trump ally and the top Republican on the House Judiciary Committee.

A Trump spokesman did not immediately respond to a request for comment.