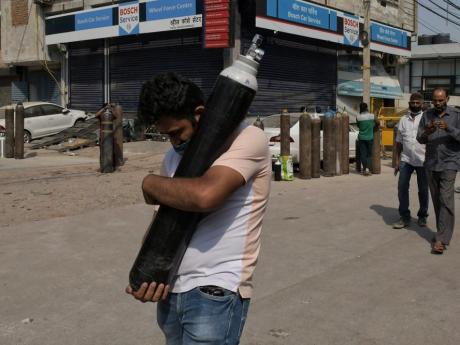 In this May 3, 2021, file photo, a man is seen carrying a refilled cylinder as family members of COVID-19 patients wait in a queue to refill their oxygen cylinders in the Mayapuri area in New Delhi, India. (AP Photo/Ishant Chauhan, File)

NEW DELHI (AP) — India's government, facing calls for a strict lockdown to slow a devastating surge in coronavirus infections, was ordered by the Supreme Court on Wednesday to submit a plan to meet New Delhi hospitals' oxygen needs within a day.

The court decided against immediately punishing officials for failing to end a two-week-old erratic supply of oxygen to overstretched hospitals.

“Ultimately putting officers in jail or hauling officers for contempt will not bring oxygen. Please tell us steps to solve this,” Justice Dhananjaya Yeshwant Chandrachud said.

The court stayed a contempt notice earlier issued to the government by the New Delhi High Court for defying its order to supply adequate oxygen to more than 40 New Delhi hospitals.

The government officials found guilty could have faced six months in prison and a fine.

With 382,315 new confirmed cases on Wednesday, India's tally has risen to more than 20.6 million since the pandemic began.

On Tuesday, the New Delhi High Court, which had summoned two Home Ministry officials for a hearing Wednesday, said the grim reality is that hospitals are reducing the number of beds and asking patients to move elsewhere.

“You can put your head in the sand like an ostrich, we will not. We are not going to take no for an answer,” Justices Vipin Sanghi and Rekha Palli said Tuesday.

Raghav Chaddha, a spokesman for the Aam Aadmi Party governing New Delhi, said hospitals were getting only 40% of their 700 metric tonnes daily needs through the federal government, and the local government was arranging additional supplies to meet the shortfall and setting up new oxygen plants.

A massive wave of infections since April has pushed India's health care system to the brink, with people begging for oxygen cylinders and hospital beds on social media and news channels.

Bodies have been piling up at cremation grounds and in graveyards with relatives waiting for hours for last rites.

Dileep Kumar, a student, said he was asked by hospital authorities to move his father to another hospital in Ghaziabad, a town on the outskirts of New Delhi, after the first hospital ran out of oxygen.

Authorities are scrambling to add more beds, sending oxygen from one corner of the country to another, and scaling up manufacturing of the few drugs effective against COVID-19.