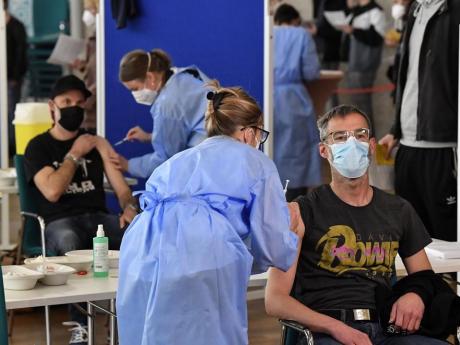 People receive the AstraZeneca vaccination against the coronavirus at the forum of the DITIB central mosque in Cologne, Germany, Saturday, May 8, 2021. (AP Photo/Martin Meissner)

PARIS — French President Emmanuel Macron welcomed the decision from the European Union not to renew its order for the AstraZeneca COVID-19 vaccine.

Macron said the EU policy is aiming at “responding in particular to the variants... We see that some other vaccines are more efficient.”

The bloc's Internal Market Commissioner, Thierry Breton, said Sunday the EU Commission has not ordered AstraZeneca shots for after June.

Two weeks ago, the EU launched legal proceedings against the pharmaceutical group for allegedly failing to respect the terms of its contract.

South Africa halted earlier this year the use of the AstraZeneca vaccine after preliminary data indicated it may be only minimally effective against the variant which is dominant in the country.

In France, the variant first identified in Britain has become largely dominant and the South African variant represents only a small percentage of the virus detected in the country.

Across the Channel, Britain has made the AstraZeneca vaccine the centerpiece of its successful vaccination campaign.