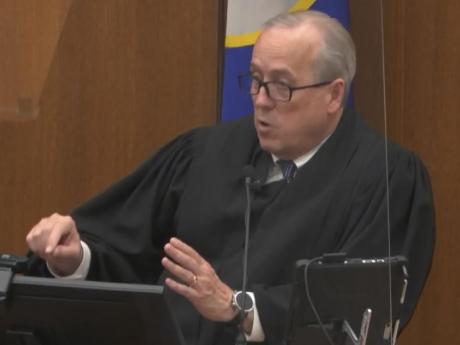 In this April 19, 2021, file image from video, Hennepin County Judge Peter Cahill addresses the court after he put the trial into the hands of the jury, in the trial of Derek Chauvin, on May 25, 2020, in the death of George Floyd at the Hennepin County Courthouse in Minneapolis, Minnesota. (Court TV via AP, Pool)

MINNEAPOLIS (AP) — A Minnesota judge has ruled that there were aggravating factors in the death of George Floyd, paving the way for the possibility of a longer sentence for Derek Chauvin, according to an order made public Wednesday.

In his ruling dated Tuesday, Judge Peter Cahill found that Chauvin abused his authority as a police officer when he restrained Floyd last year and that he treated Floyd with particular cruelty.

He also cited the presence of children when he committed the crime and the fact Chauvin was part of a group with at least three other people.

Cahill said Chauvin and two other officers held Floyd handcuffed, in a prone position on the street for an “inordinate amount of time” and that Chauvin knew the restraint was dangerous.

“The prolonged use of this technique was particularly egregious in that George Floyd made it clear he was unable to breathe and expressed the view that he was dying as a result of the officers' restraint,” Cahill wrote.

Even with the aggravating factors, legal experts have said, Chauvin, 45, is unlikely to get more than 30 years when he is sentenced June 25.

Chauvin, who is white, was convicted in April of second-degree unintentional murder, third-degree murder and second-degree manslaughter for pressing his knee against Floyd's neck for about 9 1/2 minutes as the black man said he couldn't breathe and went motionless.

Floyd's death, captured on widely seen bystander video, set off demonstrations around the United States and beyond as protesters demanded changes in policing.

Even though Chauvin was found guilty of three counts, under Minnesota statutes he'll only be sentenced on the most serious one — second-degree murder.

Under Minnesota sentencing guidelines, he would have faced a presumptive sentence of 12 1/2 years on that count, and Cahill could have sentenced him to as little as 10 years and eight months or as much as 15 years and still stayed within the guideline range.

But prosecutors asked for what is known as an upward departure — arguing that Floyd was particularly vulnerable with his hands cuffed behind his back as he was face-down on the ground.

They noted that Chauvin held his position even after Floyd became unresponsive and officers knew he had no pulse.

With Tuesday's ruling, Cahill has given himself permission to sentence Chauvin above the guideline range, though he doesn't have to, said Mark Osler, professor at the University of St Thomas School of Law.

He said attorneys for both sides will argue whether an upward departure is appropriate and how long the sentence should be.

A pre-sentence investigation report will also be conducted.