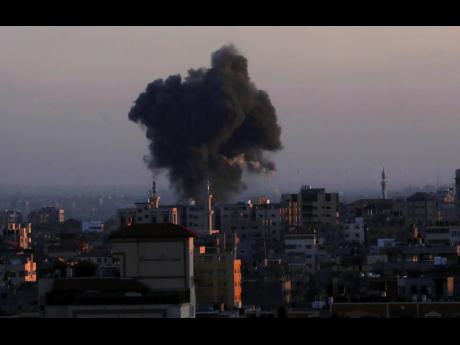 Israel on Thursday said it was massing troops along the Gaza frontier and calling up 9,000 reservists ahead of a possible ground invasion of the Hamas-ruled territory as the two bitter enemies plunged closer to all-out war. Egyptian mediators rushed to Israel for cease-fire efforts but showed no signs of progress.

The stepped-up fighting came as communal violence in Israel erupted for a fourth night, with Jewish and Arab mobs clashing in the flashpoint town of Lod. The fighting took place despite a bolstered police presence ordered by the nation’s leaders.

The four-day burst of violence has pushed Israel into uncharted territory – dealing with the most intense fighting it has ever had with Hamas while simultaneously coping with the worst Jewish-Arab violence inside Israel in decades. A late-night barrage of rocket fire from Lebanon that landed in the sea threatened to open a new front along Israel’s northern border.

Early Friday, the Israeli military said air and ground troops struck Gaza in what appeared to be the heaviest attacks yet. Masses of red flames illuminated the skies as the deafening blasts from the outskirts of Gaza City jolted people awake. The strikes were so strong that people inside the city, several kilometres away, could be heard screaming in fear.

“I said we would extract a very heavy price from Hamas,” Prime Minister Benjamin Netanyahu said in a videotaped statement. “We are doing that, and we will continue to do that with heavy force.”