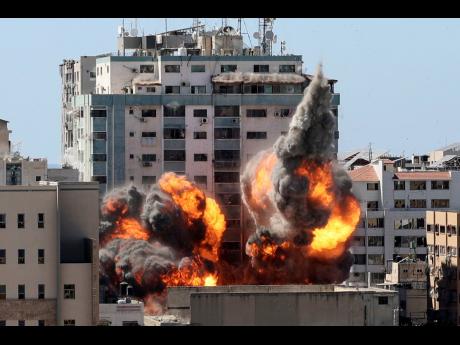 AP
A ball of fire erupts from a building housing various international media, including The Associated Press, after an Israeli airstrike yesterday in Gaza City.

News organisations demanded an explanation on Saturday for an Israeli airstrike that targeted and destroyed a Gaza City building housing the offices of The Associated Press (AP), broadcaster Al Jazeera and other media outlets.

AP journalists and other tenants were safely evacuated from the 12-storey al-Jalaa tower after the Israeli military warned of an imminent strike. Three heavy missiles hit the building within the hour, disrupting coverage of the ongoing conflict between Gaza’s Hamas rulers and Israel. At least 145 people in Gaza and eight in Israel have been killed since the fighting erupted last Monday night.

“The world will know less about what is happening in Gaza because of what happened today,” AP President and CEO Gary Pruitt said. He said the American news agency was seeking information from the Israeli government and engaging with the US State Department to learn more.

Mostefa Souag, acting director-general of Al Jazeera Media Network, called the strike a “war crime” and a “clear act” to stop journalists from reporting on the conflict.

In a standard Israeli response, the military said that Hamas was operating inside the building, and it accused the militant group of using journalists as human shields, but it provided no evidence to back up the claims.

The Trinidad and Tobago government on Saturday declared a state of emergency (SOE) and an eight-hour curfew as a “scared” population looked to the authorities to implement new measures to deal with a rising number of deaths and infections from the coronavirus.

Prime Minister Dr Keith Rowley, speaking at the weekly news conference of the Ministry of Health, said that the SOE would remain in place for 90 days, in the first instance.

“If you don’t have to be out for exempted reasons, please stay home,” Rowley said, as the country reported 5, 558 active cases of the virus and 276 deaths.

Rowley told reporters that it has now dawned on the population that the virus should be taken very seriously, saying he also come to the realisation that he is seeing a “population that is scared”.

“I am sorry that it has come to coffins and faces of dead people for us to realise that we are in and have always been in a very difficult place. Before, we were only dealing with numbers, but I think the population is at the stage now where the numbers are being seen to be of people even known to you,” he said.

The Dominican government has welcomed the island’s certification for the elimination of mother-to-child transmission of HIV and syphilis, saying it is a step towards Dominica’s achievement of its sustainable development goals (SDG).

“What we are celebrating here this evening is truly a remarkable achievement. Dominica has been able to maintain 95 per cent or more coverage of antenatal care and skilled attendance at birth,” Prime Minister Roosevelt Skerrit said at the ceremony at which the World Health Organization (WHO) certification was made.

He said that the island had also achieved 95 per cent or more coverage of HIV and syphilis screening of pregnant women, zero incidence of parental HIV per 1,000 lives of genital syphilis.

“As a result there has been no recorded cases of mother-to-child transmission of HIV and syphilis in the Commonwealth of Dominica over the past four years,” Skerrit said, adding that the “achievements of the dual elimination targets has additional positive implications as it contributes for Dominica to reach other sustainable developing goals”.

The Pan American Health Organization said Dominica has joined seven other Caribbean countries that have received the dual validation.