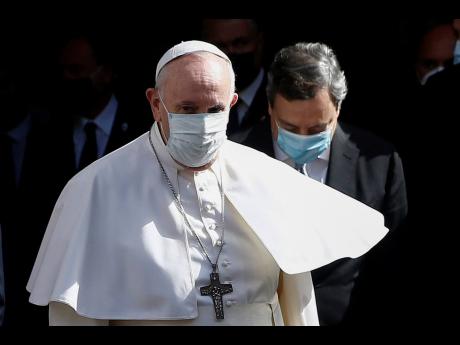 AP
Pope Francis walks with Italian Premier Mario Draghi at a conference on the Demographic Crisis in Rome Friday, May 14.

Pope Francis added his voice Friday to the chorus of alarm about Italy’s falling population, calling for government policies that provide the necessary financial stability to encourage young people to stay in Italy and have families.

Italy last year recorded 404,000 live births, the lowest number since its unification in 1861, worsening a steady decline that has already made Italy’s fertility rate one of the lowest in Europe.

With the spike in COVID-19-related deaths in 2020, the deficit between births and deaths last year hit 342,000 – the biggest gap since the 1918 Spanish Flu and the equivalent of having lost a city the size of Florence.

“An Italy without children is an Italy that doesn’t have a place in the future,” Draghi warned. “An Italy that is slowly ceasing to exist.”

The Pope praised the recent creation of a bonus for families after each child is born as a concrete form of solidarity to families in need. He encouraged longer-term, family-centric policies to give young families hope and confidence that they will be able to support big families over the years.

“It is urgent to offer young people the guarantees of a sufficiently stable job, security of having a home and incentives not to leave the country,” Francis said.

Italy has the world’s second-oldest population and one of the EU’s lowest fertility rates, at 1.27 live births per woman compared with the EU average of 1.53, according to 2019 Eurostat figures.

For years, leaders across the political spectrum have warned of the demographic disaster that looms with an increasingly ageing population without a sufficiently broad tax-paying workforce to support them.

Draghi’s US$268.6 billion coronavirus recovery plan aims in large part to address the crisis by investing in more day care centres and elementary schools to encourage families to have children. The plan also invests in digital and ecological industries geared toward young workers, while offering them help in securing mortgages so they can buy their own homes.

Francis praised these initiatives, noting that Italy is just one of many countries in Europe experiencing low birth rates.