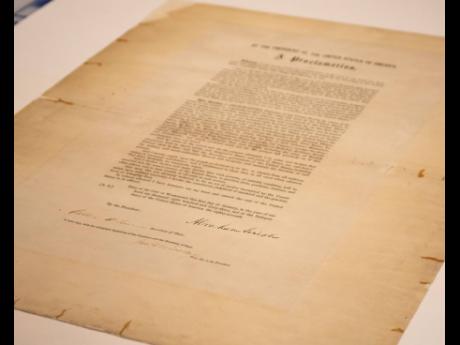 The Abraham Lincoln Presidential Library and Museum in Springfield will mark Juneteenth – the holiday commemorating the end of slavery in the United States – by displaying a rare signed copy of the Emancipation Proclamation.

The copy of the proclamation that is signed by Lincoln and Secretary of State William Seward will be displayed between June 15 and July 6. The original document is kept in the National Archives in Washington, DC.

Juneteenth – also known as Emancipation Day and Freedom Day – falls on June 19. On that day in 1865, more than two years after Lincoln signed the Emancipation Proclamation during the Civil War, enslaved blacks in Galveston, Texas were freed with the arrival of federal troops.

Though slavery was not completely abolished until the 13th Amendment, which came six months later, Juneteenth has come to symbolise the end of slavery. In May, Illinois became one of several states to make Juneteenth a state holiday.

“Few documents in all of American history carry the weight of the Emancipation Proclamation. We are proud to share it with the public and celebrate its connection to such a joyous holiday,” Melissa Coultas, acting executive director of the library and museum, said in a news release.

When the proclamation is displayed in the Treasures Gallery, windows along one side of the museum will feature a display about the history of black Americans and their fight for full citizenship. The display includes a timeline running from 1787 to 2021, covering slavery in Illinois, a supposedly free state, a riot that targeted blacks in Springfield and the first Juneteenth celebration in the city.