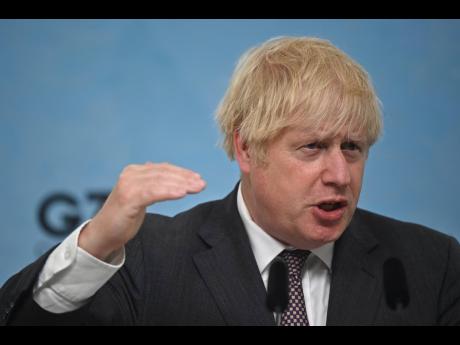 Leaders of the Group of Seven (G-7) wealthy nations staked their claim on Sunday to leading the world out of the coronavirus pandemic and crisis, pledging more than one billion coronavirus vaccine doses to poorer nations, vowing to help developing countries grow, while fighting climate change and backing a minimum tax on multinational firms.

At the group’s first face-to-face meeting in two years, the leaders dangled promises of support for global health, green energy, infrastructure and education — all to demonstrate that international cooperation is back after the upheavals caused by the pandemic and the unpredictability of former US President Donald Trump.

During their three-day summit in southwest England, the G-7 leaders wanted to convey that the club of wealthy democracies — Canada, France, Germany, Italy, Japan, the United Kingdom and the United States — is a better friend to poorer nations than authoritarian rivals such as China.

“This isn’t about imposing our values on the rest of the world,” British Prime Minister Boris Johnson told reporters at the end of the seaside summit on the rugged Cornwall coast. “What we as the G-7 need to do is demonstrate the benefits of democracy and freedom and human rights to the rest of the world.”

US President Joe Biden, who was making his first foreign trip as leader, said it was an “extraordinary, collaborative and productive meeting” that showed “America’s back in the business of leading the world alongside nations who share our most deeply held values”.

But health and environmental campaigners were distinctly unimpressed by the details in the leaders’ final communique.

“This G-7 summit will live on in infamy,” said Max Lawson, the head of inequality policy at the international aid group Oxfam. “Faced with the biggest health emergency in a century and a climate catastrophe that is destroying our planet, they have completely failed to meet the challenges of our times.”

Despite Johnson’s call to “vaccinate the world” by the end of 2022, the promise of one billion doses for vaccine-hungry countries — coming both directly and through donations to the international COVAX programme — falls far short of the 11 billion doses the World Health Organization said is needed to vaccinate at least 70 per cent of the world’s population and truly end the pandemic.

Half of the billion-dose pledge is coming from the United States and 100 million from Britain. Canada said it also would give 100 million doses, and France pledged 60 million. Altogether, the leaders said they pledged 870 million doses “directly over the next year,” with further contributions taking the total to the “equivalent of over one billion doses”.

But Biden said the leaders were clear that the commitments they made to donate doses wouldn’t be the end. The US president said getting shots into arms around the world was a “gigantic, logistical effort” and the goal might not be accomplished until 2023.

The G-7 also backed a minimum tax of at least 15 per cent on large multinational companies to stop corporations from using tax havens to avoid taxes, a move championed by the United States.

The language on China in the G-7 leaders’ communique from the meeting was more muted than the United States has used, but Biden said he was satisfied. On China’s economic behaviour, the group said it would “consult on collective approaches to challenging non-market policies and practices which undermine the fair and transparent operation of the global economy”.