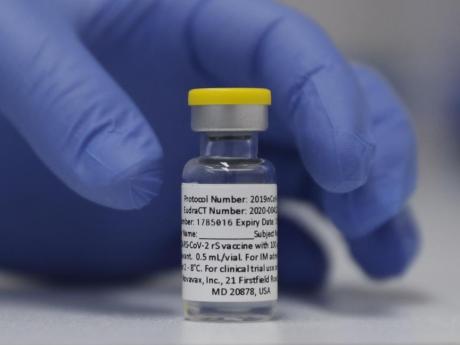 In this Wednesday, October 7, 2020, file photo, a vial of the Phase 3 Novavax coronavirus vaccine is seen ready for use in the trial at St George's University hospital in London. Novavax says its vaccine appears effective against COVID-19 in a large study, including against variants. Results from the study in the US and Mexico were released on Monday, June 14, 2021. (AP Photo/Alastair Grant, File)

Vaccine maker Novavax said Monday its COVID-19 shot was highly effective against the disease and also protected against variants in a large study in the United States and Mexico, potentially offering the world yet another weapon against the virus at a time when developing countries are desperate for doses.

The two-shot vaccine was about 90% effective overall, and preliminary data showed it was safe, the American biotechnology company said.

That would put the vaccine about on par with Pfizer's and Moderna's.

While demand for COVID-19 shots in the US has dropped off dramatically and the country has more than enough doses to go around, the need for more vaccines around the world remains critical.

The Novavax vaccine, which is easy to store and transport, is expected to play an important role in boosting vaccine supplies in the developing world.

That help is still months away, however.

The company says it plans to seek authorisation for the shots in the US, Europe and elsewhere by the end of September and will be able to produce up to 100 million doses a month by then.

“Many of our first doses will go to … low- and middle-income countries and that was the goal to begin with,” Novavax Chief Executive Stanley Erck said.

While more than half of the US  population has had at least one vaccine dose, less than one percent of people in the developing world have had one shot, according to Our World In Data.

The Pfizer, Moderna, and Johnson & Johnson vaccines are already authorised for use in the US and Europe. Europe also uses AstraZeneca's formula.

Two-thirds received two doses of the vaccine, three weeks apart, and the rest got dummy shots.

There were 77 cases of COVID-19 — 14 in the group that got the vaccine, the rest in volunteers who received the dummy shots.

None in the vaccine group had moderate or severe disease, compared with 14 in the placebo group.

The vaccine was similarly effective against several variants, including the one first detected in Britain that is dominant in the US, and in high-risk populations, including the elderly and people with other health problems.

Side effects were mostly mild — tenderness and pain at the injection site.

There were no reports of unusual blood clots or heart problems, Erck said.

Novavax reported the results in a news release and plans to publish them in a medical journal, where they will be vetted by independent experts.