US workers push back against hospitals requiring COVID vaccinations 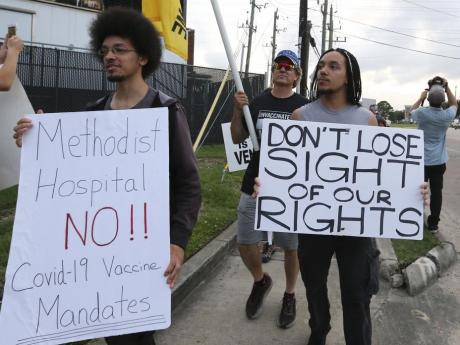 In this June 7, 2021, file photo, people march past Houston Methodist Baytown Hospital in Baytown, Texas, to protest against a policy that says hospital employees must get vaccinated against COVID-19 or lose their jobs. A federal judge dismissed their lawsuit, saying if workers don’t like the rule, they can go find another job. (Yi-Chin Lee/Houston Chronicle via AP, File)

HOUSTON (AP) — Jennifer Bridges, a registered nurse in Houston, is steadfast in her belief that it's wrong for her employer to force hospital workers like her to get vaccinated against COVID-19 or say goodbye to their jobs.

But that's a losing legal argument so far.

In a stinging defeat, a federal judge bluntly ruled over the weekend that if employees of the Houston Methodist hospital system don't like it, they can go work elsewhere.

“Methodist is trying to do their business of saving lives without giving them the COVID-19 virus. It is a choice made to keep staff, patients and their families safer. Bridges can freely choose to accept or refuse a COVID-19 vaccine; however, if she refuses, she will simply need to work somewhere else,” US District Judge Lynn Hughes wrote in dismissing a lawsuit filed by 117 Houston Methodist workers, including Bridges, over the vaccine requirement.

The ruling Saturday in the closely watched legal case over how far health care institutions can go to protect patients and others against the coronavirus is believed to be the first of its kind in the US.

But it won't be the end of the debate.

Bridges said she and the others will take their case to the US Supreme Court if they have to: “This is only the beginning. We are going to be fighting for quite a while.”

And other hospital systems around the country, including in Washington, D.C., Indiana, Maryland, Pennsylvania, and most recently New York, have followed Houston Methodist and have also gotten pushback.

Legal experts say such vaccine requirements, particularly in a public health crisis, will probably continue to be upheld in court as long as employers provide reasonable exemptions, including for medical conditions or religious objections.

The judge called that comparison “reprehensible” and said claims made in the lawsuit that the vaccines are experimental and dangerous are false.

“These folks are not being imprisoned. They're not being strapped down. They're just being asked to receive the vaccination to protect the most vulnerable in hospitals and other health care institutional settings,” said Valerie Koch, an assistant law professor at the University of Houston Law Center.

Bridges is one of 178 Houston Methodist workers who were suspended without pay on June 8 and will be fired if they don't agree by June 22 to get vaccinated.

The University of Pennsylvania Health System, the largest private employer in Philadelphia, and the NewYork-Presbyterian hospital system have likewise indicated employees who aren't fully vaccinated would lose their jobs.