‘Pure business’ at Biden-Putin summit: No hugs, no brickbats 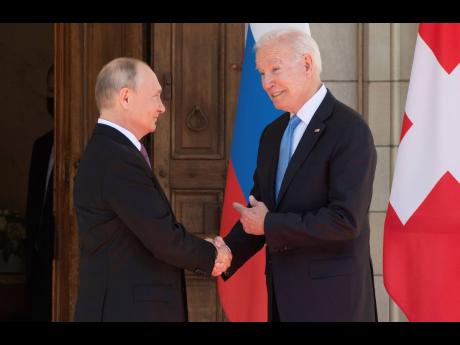 President Joe Biden and Russian President Vladimir Putin concluded their summit on Wednesday with an agreement to return their nations’ ambassadors to their posts in Washington and Moscow and a plan to begin work towards replacing the last remaining treaty between the two countries limiting nuclear weapons.

But the two leaders offered starkly different views on difficult simmering issues, including cyber and ransomware attacks originating from Russia.

Putin insisted anew that his country has nothing to do with such attacks, despite US intelligence that indicates otherwise. Biden, meanwhile, said that he made clear to Putin that if Russia crossed certain red lines – including going after major American infrastructure – his administration would respond and “the consequences of that would be devastating”.

Will Putin change his behaviour? Biden was asked at a post-summit news conference.

“I said what will change their behaviour is if the rest of the world reacts in a way that diminishes their standing in the world,” Biden said. “I’m not confident of anything. I’m just stating a fact.”

Both leaders, who have stirred escalating tension since Biden took office in January, suggested that while an enormous chasm between the two nations remains the talks were constructive.

Putin said there was “no hostility” during three hours of talks, a session that wrapped up more quickly than expected.

When it was over, Putin had first crack at describing the results at a solo news conference, with Biden following soon after. Biden said they spent a “great deal of time” discussing cybersecurity and he believed Putin understood the US position.

“I pointed out to him, we have significant cyber capability,” Biden said. “In fact, (if) they violate basic norms, we will respond. ... I think that the last thing he wants now is a Cold War.”

Putin noted that Biden raised human rights issues with him, including the fate of opposition leader Alexei Navalny. Putin defended Navalny’s prison sentence and deflected repeated questions about mistreatment of Russian opposition leaders by highlighting US domestic turmoil, including the Black Lives Matter protests and the January 6 Capitol insurrection.