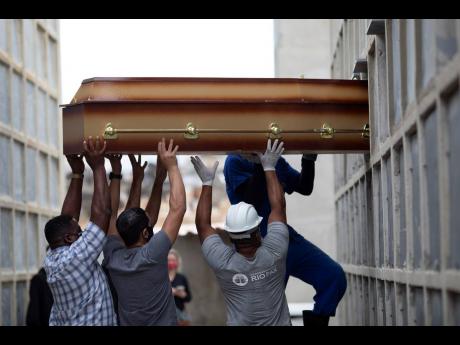 AP
In this April 13, 2021 file photo, the remains of a woman who died from complications related to COVID-19 are placed into a niche by cemetery workers and relatives at the Inahuma cemetery in Rio de Janeiro, Brazil. As Brazil hurtles toward an official COVID-19 death toll of 500,000, epidemiologists at the University of São Paulo say the true toll is closer to 600,000, maybe 800,000.

As Brazil hurtles toward an official COVID-19 death toll of 500,000 – second-highest in the world – science is on trial inside the country and the truth is up for grabs.

With the milestone likely to be reached this weekend, Brazil’s Senate is publicly investigating how the toll got so high, focusing on why President Jair Bolsonaro’s far-right government ignored opportunities to buy vaccines for months while it relentlessly pushed hydroxychloroquine, the malaria drug that rigorous studies have shown to be ineffective in treating COVID-19.

The scepticism has extended to the death toll itself, with Bolsonaro arguing the official tally from his own health ministry is greatly exaggerated and some epidemiologists saying the real figure is significantly higher – perhaps hundreds of thousands higher.

Dr Abdel Latif, who oversees an intensive-care unit an hour from São Paulo, said the fear and desperation caused by the coronavirus have been compounded by misinformation and opinions from self-styled specialists and a lack of proper guidance from the government.

“We need real humane public health policy, far from the political fight and based on science and evidence,” he said.

Brazil’s reported death toll is second only to that of the US, where the number of lives lost has topped 600,000. Brazil’s population of 213 million is two-thirds that of the US.