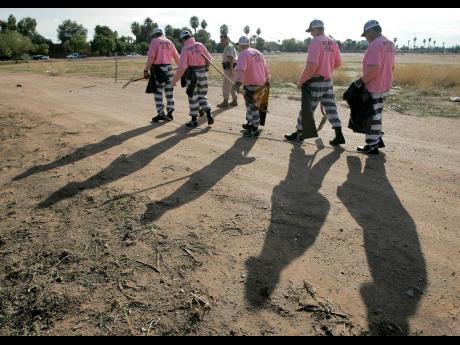 AP
In this December 11, 2007, file photo, members of the Maricopa County DUI chain gang are escorted to their assignment in Phoenix. As the nation on Thursday officially made Juneteenth a federal holiday.

As the nation this week made Juneteenth a federal holiday, honouring when the last enslaved black people learned they were free, lawmakers are reviving calls to end a loophole in the Constitution that allowed another form of slavery – forced labour for convicted felons – to thrive.

Oregon Senator Jeff Merkley and Georgia Representative Nikema Williams told The Associated Press they will reintroduce legislation to revise the 13th Amendment, which bans enslavement or involuntary servitude except as a form of criminal punishment. That exception, which has been recognised since 1865, has led to the common practice of forced labour by felons.

Social justice advocates say it created generations of black families touched by mass incarceration and poverty and that the ramifications are still being felt today. Juneteenth seemed like the appropriate time to address this “huge piece of systemic racism in the middle of our Constitution,” Merkley said.

“At the moment that we are celebrating, if you will, the 13th Amendment and the end of slavery and its eventual announcement ... we should at the same time recognise that the 13th Amendment was flawed,” Merkley said. “It enabled states to arrest people for any reason, convict them and put them back into slavery.”

The amendment’s loophole for criminal punishment encouraged former Confederate states, after the Civil War, to devise ways to maintain the dynamics of slavery. They used restrictive measures known as the “black codes,” laws targeting black people for benign interactions, from talking too loudly to not yielding on the sidewalk. Those targeted would end up in custody for these minor actions, and would effectively be enslaved again.

The so-called “abolition amendment” was introduced as a joint resolution in December. Mostly supported by Democrats in both the House and Senate, it failed to gain traction before the session’s end. The hope this time around, Merkley said, is to ignite a national movement.