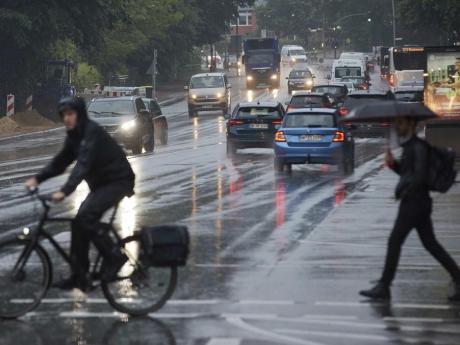 A cyclist and a passer-by with an umbrella cross a traffic light intersection during rainfall in Hamburg, Germany, Monday, June 21, 2021. (Georg Wendt/dpa via AP)

BERLIN (AP) — Thunderstorms brought a much-needed cool down to parts of Western Europe over the weekend as the continent sweltered under its first summer heat wave.

Dozens of people were reported drowned as they sought relief from the heat.

Germany's national weather service DWD said temperatures in the west and north of the country dropped from over 30 degrees Celsius over the weekend to about 20 C after a night of heavy rain.

After days of soaring temperatures, France was lashed by violent thunderstorms that sent a belltower crashing into the nave of a village church in central France.

The storm also tore through vineyards and flooded homes and public buildings.

No deaths linked to the storms have been reported but several countries reported drownings as people sought relief in pools, lakes and rivers.

At least 15 people drowned in Poland over the weekend, which was also the hottest so far this year with temperatures reaching 35 C.

Rescuers say the most frequent causes of drownings are recklessness, overestimating one's swimming abilities and going into the water after drinking alcohol.

Police in the Netherlands said two bodies were found in recent days at different locations in the Waal River, a branch of the Rhine.

There was no immediate confirmation of their identities, but authorities in neighbouring Germany have been searching for two girls, aged 13 and 14, who went missing while swimming in the Rhine near Duisburg last week.

A third teen was pulled out of the river Wednesday but couldn't be resuscitated.

In total, more than a dozen people have drowned in Germany over the past week.

Police in Austria said a 26-year-old man died Sunday after jumping from a 131-foot cliff at Wolfgangsee lake.

Moscow has also been hit with a heatwave this week, with temperatures spiking above 30 C on Sunday.

Russia's weather agency Rosgidromet warned that the unusually hot weather, with temperatures 7 C to 10 C higher than normal, is likely to persist in the Russian capital and the surrounding region through Friday.

The European Commission said Monday it is readying a fleet of 11 planes and six helicopters around the bloc to help member nations cope with forest fires in the coming months.

“The season's risk for forest fires is forecasted to be above average, with temperatures expected to be higher-than-average from June to September in the Mediterranean region,” EU's executive arm said.

“The season might also see less rainfall, especially in central Europe and many areas of the Mediterranean. This can increase the risk of wildfires.”