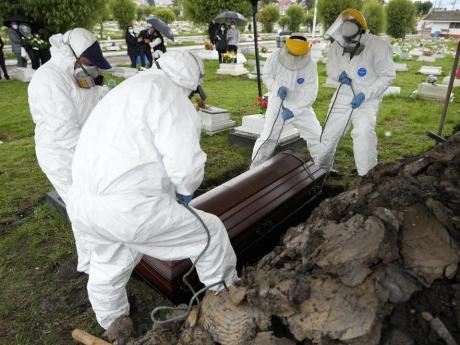 Cemetery and funeral workers lift a coffin containing the remains of a man who died of COVID-19 at the Zipaquira's Park Cemetery in Zipaquira, Colombia, Friday, June 18, 2021. Funeral workers in Colombia are struggling to dispose of bodies as the country experiences a surge in deaths from COVID-19. (AP Photo/Fernando Vergara)

The South American nation of 50 million has been registering a growing number of daily cases since April and over the past seven days, it had the world's third-highest per capita death rate from COVID-19, according to data published by Oxford University.

On Monday night, President Iván Duque blamed anti-government protests that began at the end of April for many of the fatalities, saying that “more than 10,000 deaths could have been avoided” if Colombians had not held large gatherings over the past seven weeks.

But epidemiologists in Colombia said it's too soon to tell how much of an impact the protests had on the current surge in COVID-19 deaths.

“The protests definitely played a role” in coronavirus contagion, said Diego Rosselli, a professor of epidemiology at the Javeriana University in Bogota.

“But at this moment putting any number on how many deaths they caused is mere speculation.”

Rosselli said more contagious variants of the virus may have contributed to the sharp acceleration in death rates, as has happened in nearby countries like Argentina and Brazil.