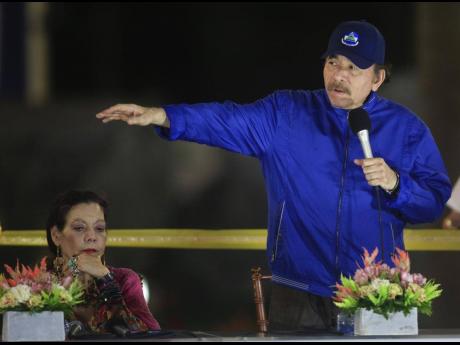 AP
In this March 21, 2019 photo, Nicaragua’s President Daniel Ortega speaks next to first lady and Vice-President Rosario Murillo during the inauguration ceremony of a highway overpass in Managua, Nicaragua.

International criticism of Nicaragua’s government grew on Tuesday after another night of arrests in Managua. Fifty-nine countries at the United Nations Human Rights Council signed on to a statement expressing concern over arbitrary arrests and the restriction of fundamental rights.

“The government must ensure the protection of human rights and bring to account those responsible,” the statement said.

The organisation called on the United Nations Security Council to invoke Article 99 of its charter “to raise this issue in the UN Security Council and present it as a growing crisis involving grave human rights abuses, which could undermine stability in the region”.

Daniel Ortega is seeking a fourth consecutive term as president and has been systematically clearing his path of potential challengers through arrests for alleged crimes against the state. The government had already significantly reduced the public space for opposition to manoeuvre through repressive laws and intimidation.

“High-profile arrests and other serious human rights violations against critics appear to be part of a broader strategy to eliminate political competition, stifle dissent, and pave the way for President Daniel Ortega’s re-election to a fourth consecutive term,” Human Rights Watch said.

There was no mention of Aleman or his whereabouts. The police statement said she would remain under guard while the allegations against her were investigated.

Also Monday, sports journalist Miguel Mendoza was arrested and journalist Carlos Fernando Chamorro, son of former President Violeta Barrios de Chamorro, said via Twitter that police had raided his home. He demanded they respect the well-being of his sister-in-law and others with her.

“They will not be able to silence journalism,” he wrote. Police raided the offices of his online news outlet Confidencial in May and the government seized the outlet’s old offices in December 2018.

Earlier, Nicaraguan writer and former Vice President Sergio Ramírez said there was no chance of free and fair elections in Nicaragua and that the opposition should refuse to participate in voting that would only legitimise Ortega’s victory.