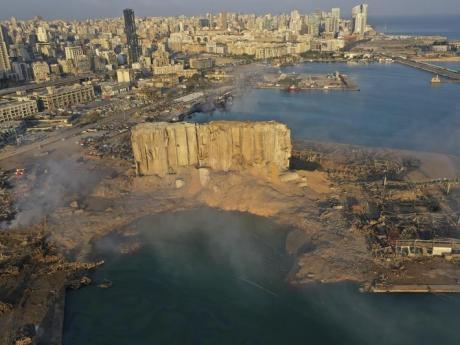 In this August 5, 2020, file photo, smoke rises after an explosion the day before at the seaport of Beirut, Lebanon. (AP Photo/Hussein Malla, File)

The decision by Ghassan Khoury came a day after the Lebanese judge leading the investigation into the explosion requested the release of 13 people who were detained after the August catastrophe, one of the largest non-nuclear blasts in history.

The National News Agency said Khoury only approved the release of seven persons, most of them junior port employees.

It added that the request to release senior employees was rejected.

NNA did not say when they will be released.

Nearly 3,000 tons of ammonium nitrate, a highly explosive material used in fertilisers that had been improperly stored in the port for years, exploded on August 4, killing 211 people, wounding more than 6,000 and damaging entire neighbourhoods nearby.

A judicial official said six men and one woman will be released but he did not say when.

He spoke on condition of anonymity in line with regulations.

The official said the head of the customs department, his predecessor and the port's director general at the time will remain in custody.

In April, six people including security officers who had been detained for months were released.

They included an officer who had written a detailed warning to top officials prior to the explosion about the dangers of the material stored at the port.

After the blast, 25 people were detained but with those released in April and the seven who will be set free, 12 will remain in detention.

But this violates their due process rights, said Aya Majzoub, Lebanon researcher at Human Rights Watch.

She added that under international law, anyone held in pre-trial detention has a right to a speedy trial or release.