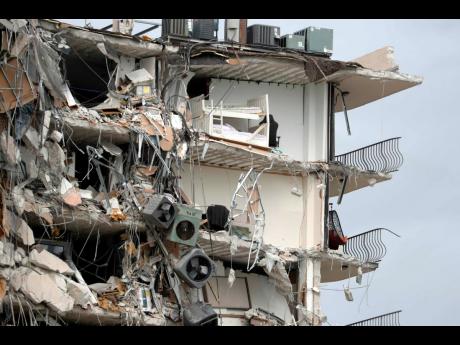 AP
Items and debris dangle from a section of the oceanfront Champlain Towers South Condo that partially collapsed Thursday yesterday in the Surfside area of Miami, Florida.

A wing of a 12-story beachfront condo building collapsed with a roar in a town outside Miami early Thursday, killing at least one person and trapping residents in rubble and twisted metal. Rescuers pulled out dozens of survivors and continued to look for more.

Nearly 100 people were still unaccounted for at midday, authorities said, raising fears that the death toll could climb sharply. But officials did not know how many were in the tower when it fell around 1:30 a.m.

“The building is literally pancaked,” Surfside Mayor Charles Burkett said. “That is heartbreaking because it doesn’t mean, to me, that we are going to be as successful as we wanted to be in finding people alive.”

Hours after the collapse, searchers were trying to reach a trapped child whose parents were believed to be dead. In another case, rescuers saved a mother and child, but the woman’s leg had to be amputated to remove her from the rubble, Frank Rollason, director of Miami-Dade Emergency Management, told the Miami Herald.

Video showed fire crews removing a boy from the wreckage, but it was not clear whether he was the same person mentioned by Rollason.

Governor Ron DeSantis, who toured the scene, said television did not capture the scale of what happened.

Rescue crews are “doing everything they can to save lives. That is ongoing, and they’re not going to rest,” he said.

Teams of 10 to 12 rescuers were entering the rubble at a time with dogs and other equipment, working until they tire from the heavy lifting, then making way for a new team, said Florida Chief Financial Officer Jimmy Patronis, the state’s fire marshal.

“They’re not going to stop just because of nightfall,” Patronis told Miami television station WPLG. “They just may have a different path they pursue.”

Patronis said he was deeply moved by the image of a bunk bed near the now-exposed top of the building.

“Somebody was probably sleeping in it,” he said. “There’s all those what-ifs.”

Authorities did not say what may have caused the collapse. On video footage captured from nearby, the centre of the building appeared to fall first, with a section nearest the ocean teetering and coming down seconds later as a huge dust cloud swallowed the neighbourhood.

Work was being done on the building’s roof, but Burkett said he did not see how that could have been the cause.

Miami-Dade County Mayor Daniella Levine Cava said she got a call from President Joe Biden, who promised to provide any federal aid that was requested.

“We’ll be there,” he said at the White House.

Hotels already had opened to some displaced residents, the mayor said, and deliveries of food, medicine and more were being hastily arranged. Rescue officials tried to determine how many people might be missing and asked residents to check in with them.