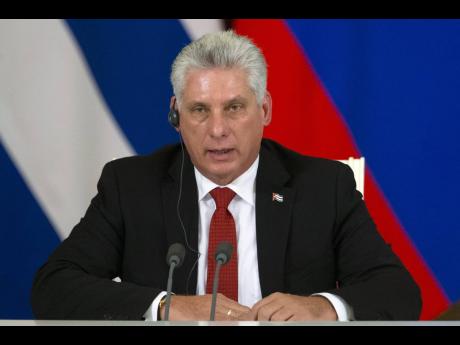 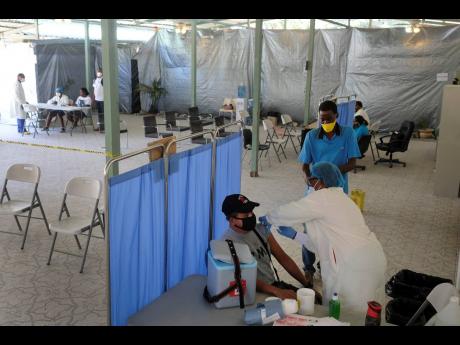 AP
A doctor inoculates a man with his first dose of the Moderna COVID-19 vaccine at the Saint Damien Hospital, in Port-au-Prince, Haiti, yesterday.
1
2

Health workers, elderly among the first group to be vaccinated in Haiti

CMC – Thirty-eight Haitians on Friday became the first group of persons to be vaccinated against COVID-19 since the start of the pandemic.

Under the supervision of the Ministry of Health, the 38 people – health workers and the elderly – were vaccinated at the University Hospital of Peace, in what the Pan American Health Organisation (PAHO) has described as a test.

The vaccination exercise follows the arrival of 500,000 doses of the COVID-19 vaccine earlier this week from the United States.

To date, Haiti has reported nearly 20,000 cases and nearly 500 deaths from the coronavirus since the start of the pandemic. However, experts believe these figures are vastly underestimated because there are few tests in Haiti.

The vaccinations began nearly two months after the Government announced a health emergency and imposed a curfew as the country entered a third wave in May.

However, health officials are concerned as while masks are mandatory to enter some businesses, very few Haitians follow the measures while on public transportation, in crowded markets and elsewhere in public.

CMC – Cuban President Miguel Diaz-Canel has denounced the distribution of what he says are “false images” of the unrest that rocked the Spanish-speaking communist island recently.

Speaking during a rally attended by thousands of supporters, along with former President Raul Castro, Diaz-Canel said what the world is seeing of Cuba “is a lie”.

There is an “overflowing hatred on social networks,” the president said.

He was speaking six days after historic demonstrations against the communist government.

During the protest, one person died and more than 100 have been arrested, including independent journalists and opposition activists, in one of the worst economic crisis in decades.

Stemming from the protest, Cuba cut off internet access for three days after the demonstration erupted last weekend.

CMC – The Guyana police are now searching for two armed men following the discovery of 20,000 marijuana plants in the East Berbice-Corentyne region on Friday.

In addition to the marijuana, they discovered a quantity of dry cannabis and seeds, ammunition and equipment.

According to a police report, early Friday they conducted an eradication exercise and on arriving at the location, they saw two men armed with firearms.

The men fled into nearby bushes but when chased by the police officers, they opened fire.

The police returned fire; no one was hurt and the men eventually disappeared.

The camps and marijuana plants, dry cannabis and seeds were all destroyed, while the other items were taken to a police station.

CMC – An umbrella immigration advocacy group in New York has called on President Joseph Biden to immediately take action after a US federal judge in Texas on Friday ruled as unlawful, a programme that has protected hundreds of thousands of undocumented young Caribbean adults and others from deportation.

Judge Andrew S. Hanen of the United States District Court in Houston, Texas, said that former US President Barack Obama superseded his authority when he created the Deferred Action for Childhood Arrivals, known by the acronym DACA, by executive order in 2012.

In his ruling, Republican-leaning Judge Hanen blocked the US Department of Homeland Security (DHS) from approving any new DACA applications.

He, however, said his order will not impact current DACA recipients or their ability to renew their DACA applications.

Murad Awawdeh, executive director of the New York Immigration Coalition (NYIC), which boasts of more than 200 immigration groups in New York State, told the Caribbean Media Corporation (CMC) that President Biden must intervene immediately to stop the disastrous implementation of the judge’s ruling.

“Today’s ruling is a chilling reminder that the Republicans’ far-right anti-immigrant agenda continues to outlive Donald Trump with devastating consequences for our communities,” he said. “Rescinding DACA would be a disaster for America’s health, economy and legacy.”

Awawdeh warned, “Nearly 50,000 New Yorkers and their families are now at risk of being ripped from the only home they’ve ever known. Judge Hanen’s ruling makes it crystal clear that Washington can’t keep playing politics with the lives of these New Yorkers and the hundreds of thousands like them across the country.”

“US Senate Majority Leader (Charles) Schumer, (House of Representatives) Speaker (Nancy) Pelosi, and President Biden must use the budget reconciliation process to finally pass permanent protections for not just these young people but also TPS (Temporary Protected Status) recipients and essential workers,” he urged. “We can’t wait any longer.”

In his 77-page ruling, Judge Hanen said that the US Congress had reserved the broad authority to regulate immigration, and that it had failed to give legal status to groups like the DACA recipients, otherwise known as Dreamers.

“The executive branch cannot just enact its own legislative policy when it disagrees with Congress’s choice to reject proposed legislation,” he wrote. “Congress has not given DHS the power to enact DACA.”

Friday’s ruling comes a little more than a year after the Supreme Court of the United States (SCOTUS) ruled against then President Donald J. Trump’s attempt to end the DACA programme, characterising it as “arbitrary and capricious”.

But the Supreme Court failed to rule on whether DACA was legally adopted.