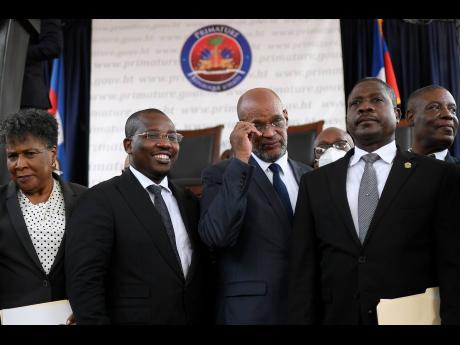 Designated Prime Minister Ariel Henry was sworn in to replace interim Prime Minister Claude Joseph, who assumed leadership of Haiti with the backing of police and the military after the July 7 attack at Moïse’s private home, which also badly injured his wife.

“I’m from a school that believes in dialogue,” Henry said as he called for unity and promised to meet with various sectors in upcoming days to build consensus. “The Haitian people are the solution to the crisis.”

Henry, a neurosurgeon and former Cabinet minister, has promised to form a provisional consensus government to lead Haiti until elections are held. He said he has already met with various unidentified actors as well as civil society and the private sector.

The government released the names of Henry’s Cabinet, with the ministers of justice, economy, finance, agriculture and others keeping their positions.

In the yard of the Nation Pantheon Museum in downtown Port-au-Prince, meanwhile, a crowd of international dignitaries and Haitian officials clad in sombre suits sat under the shade of pink and white bougainvillea to commemorate Moïse, whose assassination stunned Haiti and left a political void.

A large portrait of the slain president hung behind Joseph as he spoke to mourners. “The president is dead because of his political and social convictions,” he said.

Joseph accused oligarchs and criminals of assassinating the president’s character and then the president himself. He called on everyone to seize the moment as an opportunity to find a common purpose and durable, viable solutions.

Moïse was shot multiple times and while officials have arrested at least 26 people in the case, it remains unclear who ultimately was behind the attack. Among the arrested are 18 Colombians, five Haitians and three Haitian-Americans.

Police Chief Léon Charles announced four more formal arrests on Tuesday – at least three of them police officers, whose ranks he did not release.

“There was infiltration in the police,” he said.

Haitian police identified the fourth suspect, who was not a police officer, as Dominick Cauvin.