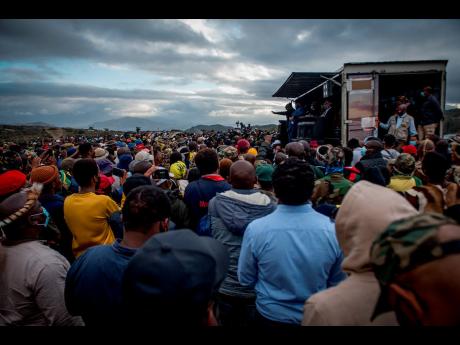 AP
In this Sunday July 4 photo, former president Jacob Zuma addresses his supporters at his home in Nkandla, KwaZulu-Natal Province, days before he gave himself up to serve a 15-month prison sentence for contempt of court.

South Africa has been rocked by the worst violence since the nation achieved democracy in 1994. Here is a closer look at the unrest.

WHAT TRIGGERED THE VIOLENCE?

The unrest began on July 8 when former President Jacob Zuma started serving a 15-month prison sentence for contempt of court. Supporters in his home province of KwaZulu-Natal set up roadblocks on major highways and burned about 20 trucks. The protests closed the N3 and N2 highways, which link the Indian Ocean ports of Durban and Richard’s Bay to the industrial hub of Johannesburg and to Cape Town.

The unrest spread within KwaZulu-Natal, where shopping malls and centres were ransacked by mobs that took food, electronics, clothes and liquor. Attacks on retail centres also spread inland to Gauteng province, to Johannesburg, the country’s largest city, and to Pretoria, the capital. In Durban and Pietermaritzburg, crowds attacked warehouses for major retailers and factories, which were set alight. Several burned until their roofs collapsed. The unrest lasted for a week until 25,000 army troops were deployed.

HOW BAD WERE THE RIOTS?

At least 215 people died in the unrest, and more than 2,500 were arrested on charges including theft and vandalism, according to government figures updated Monday.

The unrest was largely limited to the KwaZulu-Natal and Gauteng provinces, which together account for nearly 50 per cent of South Africa’s GDP. The violence did not spread to South Africa’s other seven provinces.

Extensive damage was done to 161 malls and shopping centres, 11 warehouses, eight factories and 161 liquor stores and distributors, according to the government. An estimated 10 billion rand (US$680 million) was lost in stolen goods, burned trucks and destroyed property, according to the Economist Intelligence Unit.

South Africa’s economy may sustain longer-term damage if domestic and international investors view the unrest as a sign that the country is not a safe destination for their capital. South Africa’s economy was already in recession, and the instability is expected to cause the economy to contract even further. The hardest hit will be South Africa’s poor, many of whom will not be able to buy food at competitive prices at the township shopping centres that have been closed or burned. People receiving monthly government grants, especially the elderly, will not be able to get them at centres that have been closed.

WHAT CAUSED THE DEATHS?

Police and government officials say many of the deaths were caused when people were crushed in stampedes during the chaotic ransacking of shops. At least 20 deaths occurred in the Phoenix area of KwaZulu-Natal, where residents were protecting their neighbourhood from suspected intruders, according to Police Minister Bheki Cele. It is not known how many deaths were caused by police shooting at rioters.

Human rights organisations, including Amnesty International, are investigating the deaths.

WAS THE RIOTING SPONTANEOUS?

After Zuma entered prison, numerous posts on social media encouraged protests, including attacks on highways and on retail centres. Six people have been arrested on charges of inciting violence, the government announced Monday without disclosing their identities. One of those arrested has been released on bail. Five are still in custody.

“The unrest was orchestrated, instigated and planned ... . It almost brought our country to its knees,” said acting Minister in the Presidency Khumbudzo Ntshavheni.

President Cyril Ramaphosa has also stated that the violence was planned. The police have said they have discovered large caches of ammunition.

The extent of the rioting exposed South Africa’s underlying economic problems, including high rates of unemployment and poverty. Unemployment is more than 32 per cent, and it is above 64 per cent for those under the age of 35, according to South African government statistics. More than half of the country’s 60 million people live in poverty, and more than 20 per cent are food insecure. The country is one of the most unequal in the world, and that inequality has increased since apartheid ended in 1994, according to the World Bank.

WHY HAS ZUMA BECOME THE FOCUS FOR SO MANY LEGAL CASES?

Zuma, who has been a controversial figure for years, went to prison for contempt of court because he refused to testify before a judicial commission investigating allegations of corruption during his time as the country’s president from 2009 to 2018. The commission has heard damning testimony from former Cabinet ministers and top executives of state-owned corporations that Zuma allowed members of the wealthy Gupta family to influence his Cabinet appointments and the awarding of lucrative state contracts.

The 79-year-old Zuma also faces separate charges of corruption. He’s accused of receiving bribes from the French arms manufacturer, Thales, related to the country’s controversial 1999 arms procurement contracts. At that time, Zuma was a high-ranking official in the ruling African National Congress (ANC) party and a provincial minister in KwaZulu-Natal. He is alleged to have received the bribes through his former financial adviser, Schabir Shaik, who was convicted on related charges in 2005, sentenced to prison and later released on medical parole.

Zuma was forced by his ANC party to step down as president in 2018 because of the growing allegations of corruption, but he still has a considerable following within the party, including other top ANC officials who are also facing corruption charges. Before he was imprisoned, Zuma made inflammatory speeches to his supporters in KwaZulu-Natal.

Human rights groups have welcomed his imprisonment. When he entered prison, the Nelson Mandela Foundation said it was pleased to see Zuma in custody and criticised him for “a pattern of disregard for the rule of law and for our constitutional democracy”.

The foundation said it was “profoundly disturbed” by Zuma’s willingness “to court public violence and lawlessness in support of political and personal agendas”.