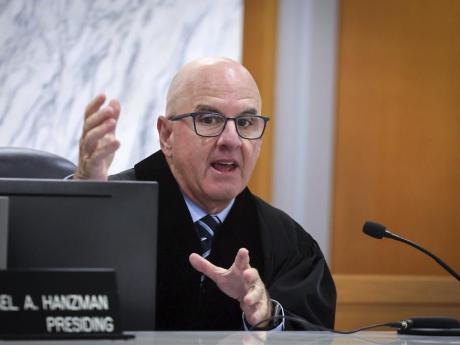 Miami-Dade Circuit Judge Michael Hanzman speaks during a hearing, Wednesday, July 21, 2021, in Miami at which tenants shared their thoughts regarding the future of the site of the Champlain Towers South building that collapsed in Surfside, Florida. (Carl Juste/Miami Herald via AP, Pool)

As the remaining rubble from the collapse of a 12-storey oceanfront condominium was cleared away Wednesday, a Florida judge said victims and families who suffered losses will get a minimum of $150 million in compensation initially.

That sum includes about $50 million in insurance on the Champlain Towers South building and at least $100 million in proceeds from the sale of the Surfside property where the structure once stood, Miami-Dade Circuit Judge Michael Hanzman said at a hearing.

“The court's concern has always been the victims here,” the judge said, adding that the group includes visitors and renters, not just condo owners.

“Their rights will be protected.”

The $150 million does not count any proceeds from the numerous lawsuits already filed since the June 24 collapse, which killed at least 97 people.

Those lawsuits are being consolidated into a single class action that would cover all victims and family members if they choose, the judge said.

“I have no doubt, no stone will be left unturned,” Hanzman said of the lawsuits.

So, far 97 victims have been identified, many of them using DNA analysis.

Miami-Dade officials had said Wednesday evening they believed they have two more victims to identify, but another person's name was released later in the day — meaning there may be just one more.

Officials have not yet announced an end to the recovery effort.

Meanwhile, the site of the tragedy has mostly been cleared away with the debris relocated to an evidentiary collection site near the airport where a thorough search will continue “with enormous care and diligence,” said Mayor Daniella Levine Cava.

She spoke about the difficulties of the search in a statement Wednesday.

“The enormous pressure of the weight of the collapse and the passage of time also make it more challenging,” she said, stressing that workers were still carefully combing through the rubble for the remaining victims as well as personal property and religious artefacts.