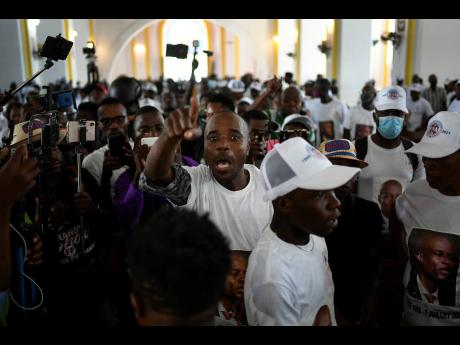 AP
A man yells for justice during a memorial service for assassinated Haitian President Jovenel Moïse in the Cathedral of Cap-Haitien, Haiti, yesterday.

A priest told mourners at a memorial service Thursday for slain President Jovenel Moïse that too much blood is being shed in Haiti as authorities warned of more violence ahead of his funeral.

“The killings and kidnappings should stop,” he said, noting that poor communities are the most affected. “We’re tired.”

The Mass at the cathedral in the northern coastal city of Cap-Haitien was about half-full as officials warned other events planned for later in the day could be cancelled amid concerns over violence.

Moïse supporters kept interrupting the Mass as they cried out and accused Haiti’s elite of killing the president.

A man who identified himself as John Jovie stood outside the church with a group of men and threatened more violence if wealthy members of the elite from the capital of Port-au-Prince showed up for the ceremonies.

“We ask them not to come to the funeral,” he said. “If they come, we will cut their heads off. We will bring our guns out of hiding. … We want justice for Moïse.”

The mayor of Cap-Haitien arrived at the cathedral with heavy security as men with high-powered weapons stood watch during the entire Mass.

After the Mass, some people signed a blue condolences book that the mayor’s office had set up near the cathedral as well-wishers stood before a portrait of Moïse and rows of candles whose flames flickered in the hot wind.

“My President. Go in peace. God sees everything. Fight for change,” wrote Louis Judlin, a 36-year-old electrician and father of two.

He said he is unemployed and struggles to find food to feed his children.

“Life is truly hard for every Haitian. To eat, to go to school, to have health, transportation,” Judlin said. “There’s misery.”

The Mass was held a day after violence erupted in Quartier-Morin, located between Cap-Haitien and Moïse’s hometown. Associated Press journalists saw the body of a man whom witnesses said was killed during the protests organised by armed men who blocked roads with large rocks and burning tyres.

“That’s the only way we have to demand justice,” Aurélien Stanley, a Moïse supporter, said of the violence. “If we don’t get justice for Jovenel, we will do whatever it takes to stop the funeral from happening.”

Overnight, local media reported the burning of a nearby bridge that connected two communities. Cap-Haitien, however, remained peaceful as people gathered for the ceremonies Thursday morning.