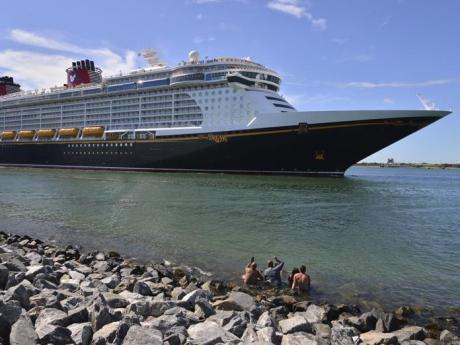 The Disney Dream sails out of Port Canaveral, Florida on a two-night test sailing, also known as a simulation cruise, Saturday, July 17, 2021. The cruise included about 300 Disney cruise employees and their guests. This is the first cruise activity out of Port Canaveral since March of 2020 when cruising was shut down due to COVID-19. (Malcolm Denemark/Florida Today via AP)

MIAMI (AP) — Pandemic restrictions on Florida-based cruise ships are no longer in place under a ruling Friday by a federal appeals court, while the US Centers for Disease Control and Prevention seek to fight a Florida lawsuit challenging the regulations.

A three-judge panel of the 11th US Circuit Court of Appeals had temporarily blocked a previous ruling last Saturday that sided with Florida officials, but the court reversed that decision on Friday, explaining that the CDC failed to demonstrate an entitlement to a stay pending appeal.

Last weekend's temporary stay had kept the CDC regulations regarding Florida-based cruise ships in place while the CDC appeals the June decision by US District Judge Steven Merryday.

Those regulations can no longer be enforced but can still be used as guidelines.

The lawsuit, championed by Republican Governor Ron DeSantis, claims that the CDC's multiple-step process to allow cruising from Florida is overly burdensome, harming both a multibillion-dollar industry that provides some 159,000 jobs and revenue collected by the state.

In court filings, attorneys for Florida had urged the 11th Circuit to reject the CDC request to keep its rules intact.

“The equities overwhelmingly favor allowing the cruise industry to enjoy its first summer season in two years while this Court sorts out the CDC's contentions on appeal,” Florida's lawyers argued.

The CDC, however, said keeping the rules in place would prevent future COVID-19 outbreaks on ships that are vulnerable to the spread of the virus because of their close quarters and frequent stops at foreign ports.

“The undisputed evidence shows that unregulated cruise ship operations would exacerbate the spread of COVID-19, and that the harm to the public that would result from such operations cannot be undone,” the CDC said in a court filing.

The CDC first flatly halted cruise ships from sailing in March 2020 in response to the coronavirus pandemic, which had affected passengers and crew on numerous ships.

Then the CDC on October 30 of last year imposed a four-phase conditional framework it said would allow the industry to gradually resume operations if certain thresholds were met.

Those included virus mitigation procedures and a simulated cruise to test them before embarking regular passengers.

Merryday's decision concluded that the CDC can't enforce those rules for Florida-based ships and that they should merely be considered nonbinding recommendations or guidelines.

Several cruise lines have begun preliminary cruises under those guidelines, which the Tampa judge agreed with Florida are too onerous.