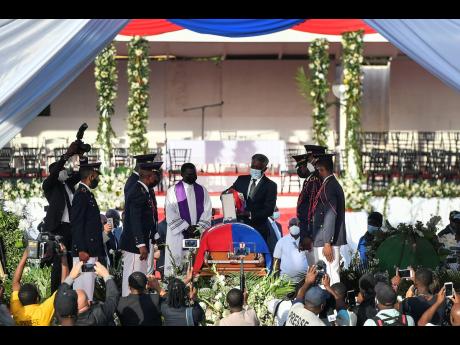 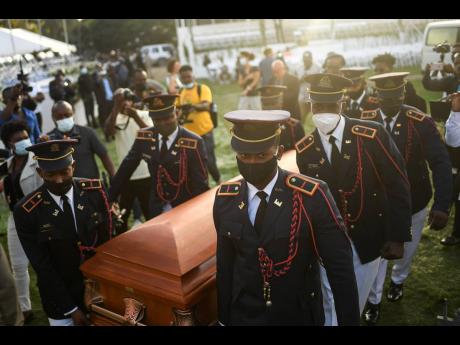 AP
Police carry the coffin of slain Haitian President Jovenel Moïse at the start of the funeral at his family home in Cap-Haitien, Haiti, yesterday.
1
2

The casket carrying the body of former President Jovenel Moïse was draped with the Haitian flag and adorned with white flowers, as the private funeral service for the assassinated head of state took place Friday amid heavy security and continued political uncertainty.

Uniformed members of Haiti’s military served as pallbearers, as the body arrived shortly after dawn at his family’s seaside property where the funeral was held.

Moïse, 53, born in Trou-du-Nord, 17 miles from Cap-Haïtien, was shot at least 12 times when armed gunmen invaded his private residence overlooking the capital on July 7. His wife, Martine, was injured during the attack and had to seek medical treatment in the United States, returning last weekend.

Earlier this week, she told Haitians that the funeral would be paid for by the family rather than the public treasury.

“Your moral support gives the presidential family the courage to go through this great pain,” she said, adding that she was “very touched by all the expressions of sympathy” shown towards her.

The First Lady said that she also wanted to thank the national and international authorities who have paid a “vibrant tribute” to her husband, and that she urges them to “remain in prayer … on the day of the funeral (so as) to accompany President Moïse to his final resting place.

“In this dark period of our history, the First Lady renews her wishes of courage to the entire people and joins your prayers for peace and justice to reign in Haiti,” she said in her statement.

Moïse, a political novice, who had succeeded the highly popular musician Michel Martelly in 2017 as Haiti’s head of state, following a 14-month election process that saw violence and allegations of fraud, had been ruling the French-speaking Caribbean Community (CARICOM) country by decree for more than a year, after insisting that his term of office expires in February next year.

He had been planning to stage a constitutional referendum on September 26 and the authorities were also planning for legislative and presidential elections on that day with the second round of voting schedule for November.

Moise funeral took place a few days after 71-year-old neurosurgeon Dr Ariel Henry, whom Moise had named as the country’s seventh prime minister since 2017, less than 48 hours before his murder, was sworn into office.

Opposition parties have publicly dismissed the new head of government, referring to him as a puppet of the international community.

“Holding botched elections to quench the thirst for power of a few politicians and to strengthen the system of exclusion is a homicide crime. The new government must listen to the people and not to the representatives of the big international capitals,” said former legislator, Gary Bodeau.”

He said the assassination of Moïse ”is a decisive moment in the struggle of the people against the system of exclusion in Haiti.

“It is also an opportunity for the nation to reclaim its sovereignty. We first need a broad consensus to change the Constitution before the election” said Bodeau.

Over the last two days, protests took place in the north of the country, where Moïse was born with demonstrators set up roadblocks and demanding accountability for his death.

Haitian authorities have arrested nearly 30 people, including former Colombian military officers and three Haitian Americans in connection with the assassination.