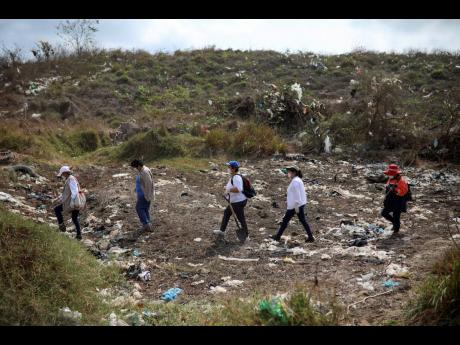 AP
Members of the Solecito Collective, who are seeking their missing loved ones, look for signs of clandestine graves at a municipal dump after an anonymous source sent the group a map suggesting hundreds of bodies were buried in the area, in the port city of Veracruz, Mexico. The mainly female volunteer searchers who fan out across Mexico to dig for the bodies of their murdered relatives are themselves increasingly being killed, putting to the test the government’s promise to help them in their quest for a final shred of justice: a chance to mourn.

The mainly female volunteers who fan out across Mexico to hunt for the bodies of murdered relatives are themselves increasingly being killed, putting to the test the government’s promise to help them in their quest for a final shred of justice: a chance to mourn.

Those who carry on the effort tell tales of long getting threats and being watched – presumably by the same people who murdered their sons, brothers and husbands.

But now threats have given way to bullets in the heads of searchers who have proved far better than the authorities at ferreting out the clandestine burial and burning pits that number in the thousands. Two searchers have been slain over the past two months.

Aranza Ramos had spent over a year searching for her husband, Bryan Celaya Alvarado, after he vanished on December 6, 2020. That day he became one of Mexico’s 87,855 ‘disappeared’ people. Most are thought to have been killed by drug cartels, their bodies dumped into shallow graves or burned.

Searchers have learned over the last decade, since the height of Mexico’s 2006-2012 drug war, that the gangs often use the same locations over and over again, creating grisly killing fields.

It was at one such field, known as Ejido Ortiz, in the northern border state of Sonora, where Aranza Ramos had been helping search on July 15 – the day she herself was killed.

“In Ejido Ortiz several clandestine crematoriums have been found, some still smoking and burning when they were found,” Ramos’ search group said in a statement. “This ejido (collective farm plot) is an active extermination site.”

So active that searchers say they get nervous when the burials they happen on are too fresh. It means the killers may still be around and using the site.

After a day of searching – the volunteers plunge metal rods into the soil to release the tell-tale odour of death – Ramos returned to her home near the city of Guaymas. Just before midnight, she was abducted from her home. The killers drove her a short distance and dumped her bullet-ridden body on the roadside.

Cecilia Duarte, who has spent three years working with the search group ‘Buscadoras por la Paz’ (Searchers for Peace), attended meetings with Ramos in the week before she was killed. Duarte, who found the body of her own missing son and is now searching for a missing nephew, said Ramos always tried to play it safe.

“She tried not to stand out, she wasn’t a spokeswoman,” said Duarte. Indeed, Ramos avoided attention. The Associated Press had tried to contact her two months before she was killed, but she did not answer messages.

“Aranza posted a message the week before she died, saying she was searching for her husband, not for the suspects,” Duarte recalled.

• Human remains aren’t referred to as corpses or bodies. The searchers call them “treasures”, because to grieving families they are precious.

• Searchers usually call law enforcement when they think they’ve found a burial, mostly because authorities often refuse to conduct the slow but critical DNA testing unless the remains are professionally exhumed.

• Searches are not conducted to find perpetrators, only to find loved ones.

It is the latter rule that volunteers hoped would keep them safe from retaliation.

“As searchers, we are not seeking to find out who is guilty. We are searching for treasures,” said Patricia ‘Ceci’ Flores, founder of Madres Buscadores de Sonora (Searching Mothers of Sonora).

For a long time, it has meant that searchers, and the police who often accompany them, focus on finding graves and identifying remains – not collecting evidence of how they died or who killed them. Search groups sometimes even get anonymous tips about where bodies are buried, knowledge probably available only to the killers or their accomplices.

But that long-standing arrangement appears to have broken down.

The day after Ramos was killed, Flores received a phone threat. “I got a call saying, ‘You’re going to be next,’” Flores said. Since then, police have assigned a patrol car to stand guard outside her home in Hermosillo.

Sonora state officials have agreed to provide security for searchers deemed to be in danger. The state also agreed to assign excavation teams to potential burial sites found by searchers within three to five days. But officials seem more interested in damage control. They got the searchers to agree not to take photos of burial sites.

President Andrés Manuel López Obrador gave a vague and self-assured statement when asked about the killing of Ramos. “We are going to continue to protect all women. We condemn these crimes.”

But Ramos was not the first. On May 30, a volunteer search activist, Javier Barajas Piña, was gunned down in the state of Guanajuato, Mexico’s most violent.

And two journalists have been killed in Sonora in the space of about two months; on Thursday, reporter Ricardo López was shot to death in a parking lot in Guaymas, the same township where Ramos was killed.

Fear has always accompanied the searchers. They go to wild, remote, abandoned places where terrible crimes have been committed. But up to now, they mostly shrugged it off.

Cecilia Duarte, the volunteer with Ramos, recalled of those days: “They sent us a message from a false Facebook account saying they were going to flay the skin from us. But I always thought that if they are really going to do something to you, they are not going to warn you.”

At another search site, Duarte said, she once felt the sense of being watched – and she spotted somebody observing her group from a nearby hillside. Still, the searchers kept on.

But Ramos’ killing changed things, she said. “That did hit us hard. Some people stopped the searches.”

Multiple cartels, including one run by Rafael Caro Quintero – improperly released from prison while serving a sentence for the 1985 murder of a DEA agent – have been fighting for control of Sonora and its valuable trafficking routes to the US. They include the two main factions of the Sinaloa cartel, operating through local gangs.

“The authorities should do more, it’s not enough,” said Flores of Madres Buscadores de Sonora. “They should do more investigation, provide more security, they should be investigating so that the mothers aren’t the ones who have to go out in the fields searching.”

The UN human rights office in Mexico made the same point: “When a government does not fulfil its duty (to carry out searches), it puts the families of the disappeared at risk.”