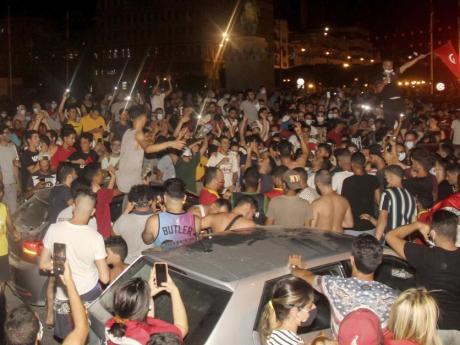 TUNIS, Tunisia (AP) — Troops surrounded Tunisia's parliament and blocked its Speaker from entering Monday after the president suspended the legislature and fired the prime minister following nationwide protests over the country's economic troubles and the government's handling of the coronavirus crisis.

But his critics accused him of a power grab, and the North African country's overseas allies expressed concern that its young democracy might be descending again into autocracy.

In a move sure to fuel those worries, police raided the offices of broadcaster Al Jazeera and ordered it to shut down.

Tunisia, which ignited the Arab Spring in 2011 when protests led to the overthrow of its longtime autocratic leader, is often regarded as the only success story of those uprisings.

But democracy did not bring prosperity: Tunisia's economy was already flailing before the pandemic hit, with 18% unemployment, and young people demanding jobs and an end to police brutality protested in large numbers earlier this year.

The government recently announced cuts to food and fuel subsidies as it sought its fourth loan from the International Monetary Fund in a decade, fuelling anger in impoverished regions.

The pandemic has only compounded those problems, and the government recently reimposed lockdowns and other virus restrictions in the face of one of Africa's worst outbreaks.

Angry at the economic malaise and the poor handling of the pandemic, thousands of protesters defied virus restrictions and scorching heat in the capital, Tunis, and other cities Sunday to demand the dissolution of parliament.

The largely young crowds shouted “Get out!” and slogans calling for early elections, and also pushed for economic reforms.

Clashes erupted in many places.

The president said he had to fire the prime minister and suspend parliament because of concerns over public violence.

He said he acted according to the law — but parliament speaker Rached Ghannouchi, who heads the Islamist party that dominates the legislature, said the president didn't consult with him or the prime minister as required. The three have been in conflict.

“We have taken these decisions ... until social peace returns to Tunisia and until we save the state,” Saied said in a solemn televised address.

He warned against any breach of public order, threatening severe penalties.

Police intervened Monday to prevent clashes outside the parliament building between lawmakers from the dominant Ennahdha party and demonstrators supporting the president.

Both sides shouted and some threw stones, according to an Associated Press reporter and videos circulating online.