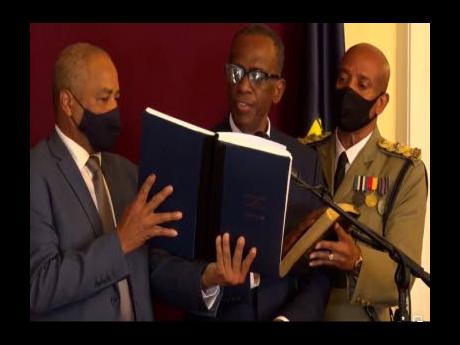 Phillip Joseph Pierre was sworn in as the 12th prime minister of St Lucia, since independence in 1979, seeking the “divine intervention in fulfilling the hopes and aspirations of the people of St Lucia”.

Pierre, 66, an economist/accountant, led the St Lucia Labour Party (SLP) to a convincing victory in Monday’s general election, winning 13 of the 17 seats that were at stake in the National assembly. The United Workers Party, which held office until then, won only two seats, down from the 11 it enjoyed in the last Parliament, with the other two seats going to independent candidates, including former prime minister, Stephenson King.

“This is the start of a new beginning,” an emotional Pierre told the nation at the ceremony held at the official residence of the Governor General Sir Neville Cenac and broadcast live across the island.

“As your servant leader, I shall serve all the citizens of the country regardless of their social class or station in life. The task ahead will not be easy, but together with my team and able and experienced men and women we will deliver to the people of St Lucia,” said Pierre, who served as deputy prime minister in a previous SLP administration headed then by Dr Kenny Anthony during the period 2011-16.

“I ask for your patience in the coming weeks and months as we try to assess the state of the country’s financing and capacity to deliver as early as possible the commitments made to the people of St Lucia,” Pierre said.

In his address after being sworn in, Pierre said, “St Lucia, we cannot fail. I will not fail you.

“I thank you for the opportunity to serve. I won’t do it alone. I will seek the counsel of the wise and if you stand firm with me, together we shall not fail,” he added.