Biden to announce new eviction ban due to COVID spread 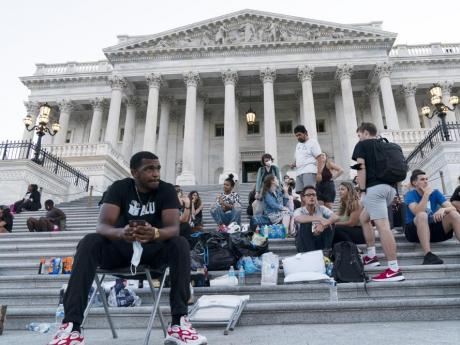 Supporters of Representative Cori Bush camp with her outside the US Capitol in Washington, Monday, August 2, 2021, as anger and frustration has mounted in Congress after a nationwide eviction moratorium expired at midnight Saturday. (AP Photo/Jose Luis Magana)

WASHINGTON (AP) — The Biden administration will announce a new 60-day eviction moratorium that would protect areas where 90% of the United States population lives, according to three people familiar with the plans who insisted on anonymity to discuss the forthcoming announcement.

The Centers for Disease Control and Prevention has identified a legal authority for a new and different moratorium that would be for areas with high and substantial increases in COVID-19 infections.

The extension helps to heal a rift with liberal Democratic lawmakers who were calling on executive action to keep renters in their homes as the delta variant of the coronavirus spread and a prior moratorium lapsed at the end of July.

Administration officials had previously said a Supreme Court ruling stopped them from setting up a new moratorium without congressional backing, saying that states and cities must be more aggressive in releasing nearly $47 billion in relief for renters on the verge of eviction.

The new policy came amid a scramble of actions by the Biden team to reassure Democrats and the country that it could find a way to halt potential evictions.

Treasury Secretary Janet Yellen briefed House Democrats Tuesday on the administration's efforts to prevent widespread housing evictions after a moratorium lapsed, but lawmakers protesting outside the US Capitol said more needs to be done, intensifying pressure on President Joe Biden to act.

Yellen told Democrats on a private call about the work underway to ensure some $47 billion in federal housing aid approved during the COVID-19 crisis makes it to renters and landlords.

She provided data so that lawmakers could see how their districts and states are performing with distributing the relief, according to a person on the call.

The White House has said state and local governments have been slow to push out that federal money and is pressing them to do so swiftly after the eviction moratorium expired over the weekend.