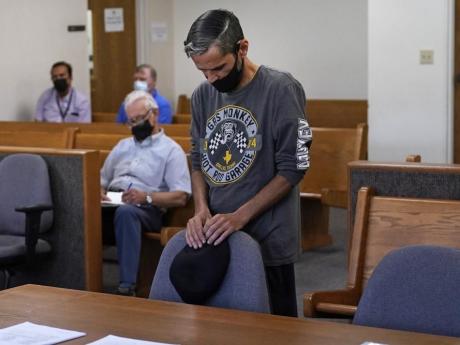 Luis Vertentes, a tenant from East Providence, Rhode Island, stands before Judge Walter Gorman during an eviction hearing, Monday, Aug. 2, 2021, in Providence. Rhode Island tenants facing eviction after the lifting of a federal moratorium on being ousted for unpaid rent plead their case in court. Vertentes agreed to leave his residence, which he has not paid rent on in four months, in about three weeks. (AP Photo/Charles Krupa)

PROVIDENCE, R.I. (AP) — Gabe Imondi, a 74-year-old landlord from Rhode Island, had come to court hoping to get his apartment back.

He was tired of waiting for federal rental assistance and wondered aloud “what they're doing with that money?”

Hours later, Luis Vertentes, in a different case, was told by a judge he had three weeks to clear out of his one-bedroom apartment in nearby East Providence.

The 43-year-old landscaper said he was four months behind on rent after being hospitalised for a time.

“I'm going to be homeless, all because of this pandemic,” Vertentes said.

“I feel helpless like I can't do anything even though I work and I got a full-time job.”

Scenes like this played out from North Carolina to Virginia to Ohio and beyond Monday as the eviction system, which saw a dramatic drop in cases before a federal moratorium expired over the weekend, rumbled back into action.

Activists fear millions will be tossed onto the streets as the delta variant of the coronavirus surges.

The Biden administration allowed the federal moratorium to expire over the weekend and Congress was unable to extend it.

Historic amounts of rental assistance allocated by Congress had been expected to avert a crisis.

But the distribution has been painfully slow: Only about $3 billion of the first tranche of $25 billion had been distributed through June by states and localities.

A second amount of $21.5 billion will go to the states.

More than 15 million people live in households that owe as much as $20 billion to their landlords, according to the Aspen Institute.

As of July 5, roughly 3.6 million people in the US said they faced eviction in the next two months, according to the US Census Bureau's Household Pulse Survey.

Around the country, courts, legal advocates and law enforcement agencies were gearing up for evictions to return to pre-pandemic levels, a time when 3.7 million people were displaced from their homes every year, or seven every minute, according to the Eviction Lab at Princeton University.

Indiana and Missouri also have more than 80,000 filings.