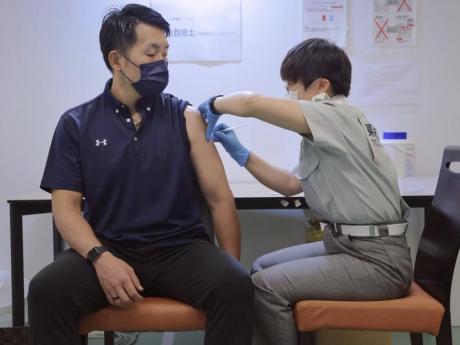 In this August 2, 2021, file photo, a visitor receives a shot of the Pfizer COVID-19 vaccine at the Tokyo Vaccination Center at Aoyama Gakuin University in Tokyo. In a new government policy that was debated in parliament on Wednesday, August 4, 2021, coronavirus patients with moderate symptoms will isolate at home instead of in hospitals, as new cases surge in Tokyo to record levels during the Olympic Games. (Stanislav Kogiku/Pool Photo via AP)

TOKYO (AP) — Japan's government is introducing a contentious new policy in which coronavirus patients with moderate symptoms will isolate at home instead of in hospitals, as new cases surge in Tokyo to record levels during the Olympic Games.

Prime Minister Yoshihide Suga's plan, which aims to save hospital beds almost exclusively for those with serious symptoms or at risk of developing them, is a major policy shift as new cases in the capital have more than tripled since the Olympics began on July 23.

The new policy, introduced this week, was debated in parliament on Wednesday.

Opposition as well as some governing party lawmakers and experts charged that the lives of people isolating at home without adequate care would be at risk.

Suga, who has been criticised for insisting on hosting the Olympics despite public virus fears, says there is no evidence linking the upsurge in cases to the Games.

He said the home isolation policy is meant to ensure that hospital care is available for seriously ill patients, and that the new plan is only for areas where hospitals are severely strained.

Infections, propelled by the more contagious delta variant, could accelerate to 10,000 a day in Tokyo alone by mid-August, some experts say.

They called for a current state of emergency in Tokyo and five other areas to be expanded nationwide.

The emergency measures, which focus on alcohol bans and shorter hours for eateries, are increasingly ignored by the public, which has tired of restrictions.