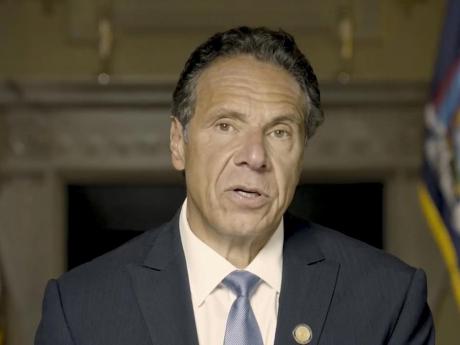 ALBANY, N.Y. (AP) — A majority of state Assembly members support beginning impeachment proceedings against Governor Andrew Cuomo if he doesn't resign over investigative findings that he sexually harassed at least 11 women, according to an Associated Press count Wednesday.

At least 82 of the body's 150 members have said publicly or told The AP that they favoured initiating the process of ousting the third-term Democratic governor if he doesn't quit.

A simple majority of Assembly members is needed to authorise an impeachment trial.

Cuomo has denied that he made any inappropriate sexual advances and insisted the findings didn't reflect the facts.

But while political pressure grew, so did the potential for criminal charges against Cuomo, who basked in national attention last year as the blunt-but-relatable voice of fighting the coronavirus in an early US hotspot, only to see his political future imperilled a year later.

District attorneys in Manhattan, suburban Westchester and Nassau counties and the state capital of Albany said they asked for investigative materials from the inquiry, overseen by Democratic state Attorney General Letitia James.

James' investigation found that Cuomo had violated civil laws against sexual harassment. Making no conclusions about whether he should be criminally charged, investigators left the door open for local prosecutors to bring cases.

“We are reviewing the deeply disturbing findings,” said Joyce A Smith, the acting district attorney in Long Island's Nassau County.

She pledged her office would “thoroughly and expeditiously investigate any potential crimes” that happened there.

After James released her report Tuesday, Democrats from the statehouse to the White House called for Cuomo to go, with President Joe Biden saying the governor should resign.

But he showed no signs of heeding them, saying that some episodes described in the report never happened, others were misconstrued or mischaracterised and the whole exercise was tainted.

“Politics and bias are interwoven throughout every aspect of this situation,” he said in a recorded video response.