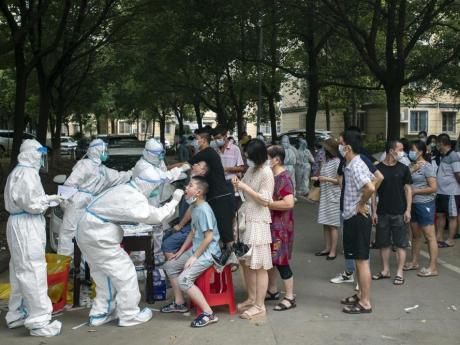 Residents line up to be tested for COVID-19 in Wuhan, central China's Hubei province, Tuesday, August 03, 2021. The delta variant is challenging China’s costly strategy of isolating cities, prompting warnings that Chinese leaders who were confident they could keep the virus out of the country need a less disruptive approach. (Chinatopix via AP)

BEIJING (AP) — The delta variant is challenging China's costly strategy of isolating cities, prompting warnings that Chinese leaders who were confident they could keep the coronavirus out of the country need a less disruptive approach.

As the highly contagious variant pushes leaders in the United States, Australia and elsewhere to renew restrictions, President Xi Jinping's government is fighting the most serious outbreak since last year's peak in Wuhan.

The ruling Communist Party is reviving tactics that shut down China: Access to a city of 1.5 million people has been cut off, flights cancelled and mass testing ordered in some areas.

That “zero tolerance” strategy of quarantining every case and trying to block new infections from abroad helped to contain last year's outbreak and has kept China largely virus-free.

But its impact on work and life for millions of people is prompting warnings that China needs to learn to control the virus without repeatedly shutting down the economy and society.

Zhang Wenhong, a Shanghai doctor who became prominent during the Wuhan outbreak, suggested in a social media post that China's strategy could change.

“We will definitely learn more” from the ongoing outbreak, he said, calling it a stress test for the nation.

“The world needs to learn how to coexist with this virus,” wrote Zhang, who has three million followers on the widely used Sina Weibo platform.

China's controls will be tested when thousands of athletes, reporters and others arrive for the Winter Olympics in Beijing in February.

And the ruling party faces a politically sensitive change of leadership in late 2022, for which leaders want upbeat economic conditions.

Last year, China shut down much of the world's second-biggest economy and cut off almost all access to cities with a total of 60 million people — tactics imitated on a smaller scale by governments from Asia to the Americas.

That caused China's most painful economic contraction in five decades, but Beijing was able to allow business and domestic travel to resume in March 2020.

The new infections, many in people who have already been vaccinated, have jolted global financial markets, which worry Beijing's response might disrupt manufacturing and supply chains.