‘There are only so many beds’: COVID-19 surge hits US hospitals 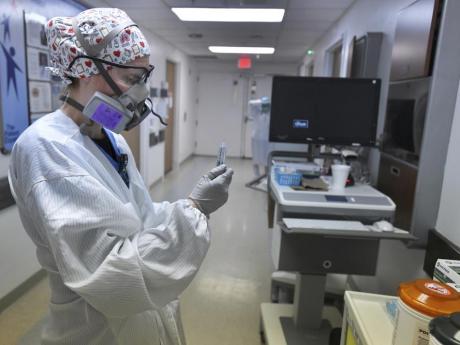 Wearing layers of protective gear, registered nurse Taylor Perri prepares her equipment tray for the next patient as she works in the COVID-19 ward at UF Health's downtown in Jacksonville, Florida, campus Friday, July 30, 2021. The second surge of COVID-19 infections in Jacksonville is stretching the capacity of area medical facilities to care for patients. (Bob Self/The Florida Times-Union via AP)

In Georgia, medical centres are turning people away for lack of space.

And a Louisiana hospital had to postpone an organ transplant.

“We are seeing a surge like we've not seen before in terms of the patients coming,” Dr Marc Napp, chief medical officer for Memorial Healthcare System in Hollywood, Florida, said Wednesday.

“It's the sheer number coming in at the same time. There are only so many beds, so many doctors, only so many nurses.”

Coronavirus hospitalisations are surging again as the more contagious delta variant rages across the country, forcing medical centres to return to a crisis footing just weeks after many closed their COVID-19 wards and field hospitals and dropped other emergency measures.

The number of people now in the hospital in the US with the virus has more than tripled over the past month, from an average of roughly 12,000 to almost 43,000, according to the Centers for Disease Control and Prevention.

That is still nowhere close to the nearly 124,000 in hospitals at the very peak of the winter surge in January.

But health experts say this wave is perhaps more worrying because it has risen more swiftly than prior ones.

Also, a disturbingly large share of patients this time are young adults.

And to the frustration of public health experts and frontline medical workers, the vast majority of those now hospitalised are unvaccinated.

Florida, Georgia and Louisiana alone account for nearly 40% of all hospitalisations in the country.

Louisiana and Georgia have some of the lowest vaccination rates in the nation, with around 38% of their populations fully inoculated.

Florida is closer to the national rate, at 49%. By way of comparison, most New England states are well over 60%.

The variant has sent new US cases surging to 94,000 a day on average, a level not seen since mid-February.