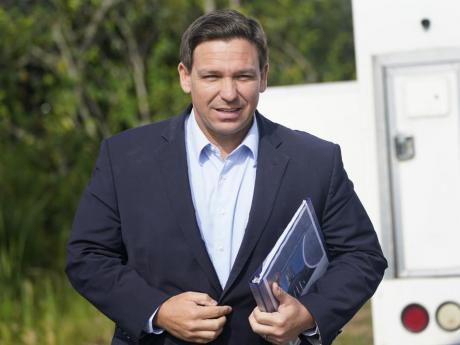 ORLANDO, Florida (AP) — Florida Governor Ron DeSantis on Monday threatened local governments with $5,000 fines per violation for requiring their employees to get vaccinated against the coronavirus that has overrun hospitals and killed tens of thousands across the state.

Local municipalities such as Orange County and the city of Gainesville potentially face millions of dollars in cumulative fines for implementing a requirement that their employees get a COVID-19 vaccine, the Republican governor said.

“We are not going to let people be fired because of a vaccine mandate,” DeSantis said at a news conference outside Gainesville.

“You don't just cast aside people who have been serving faithfully over this issue, over what is basically a personal choice on their individual health.”

Florida has been a national epicentre for the virus's spread this summer, with COVID-19 deaths in Florida accounting for more than 20% of the virus-related deaths across the country last week, according to data from Johns Hopkins University.

At the news conference, DeSantis called on several local government workers from central Florida to explain why they didn't want to get a vaccine at the risk of losing their jobs.

Several offered false conspiracy theories about the vaccines, which medical experts have said are safe and highly effective.

Many of the municipalities requiring employees to get vaccinated offer exemptions for medical or religious reasons.

“It is our belief that as an employer we retain the right to require vaccination as a condition of employment,” Taylor said in an email.

At a news conference, Orange County Mayor Jerry Demings, a Democrat, said that he believed many of the decisions the Republican governor makes are politically motivated and that the county “would deal” with DeSantis' threat, either through the courts or another manner.

“It could be a lot of money, yes, no question about it,” Demings said.

“At the end of the day, it is our goal to protect the people in our greater community, to keep them safe, which is a fundamental role of government.”

DeSantis is running for reelection next year and is widely seen as a potential candidate to be the GOP's presidential nominee in 2024.

Earlier this year, DeSantis signed legislation prohibiting proof of vaccination in order to get services from businesses or governments.

He also issued an order preventing local governments from imposing restrictions meant to stop the spread of the virus.