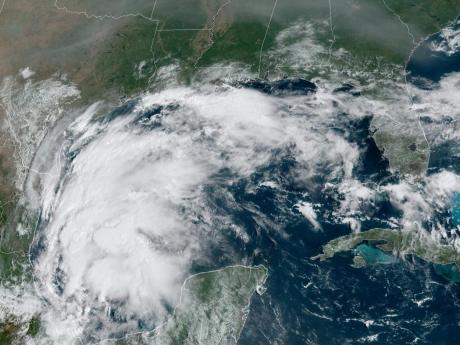 This satellite image provided by NOAA shows Tropical Storm Nicholas in the Gulf of Mexico on Sunday, September 12, 2021. Tropical storm warnings have been issued for coastal Texas and the northeast coast of Mexico. Nicholas is expected to produce storm total rainfall of five to 10 inches, with isolated maximum amounts of 15 inches, across portions of coastal Texas into southwest Louisiana Sunday, September 12 through midweek. (NOAA via AP)

HOUSTON (AP) — Tropical Storm Nicholas strengthened just off the Gulf Coast and could blow ashore in Texas as a hurricane Monday as it brings heavy rain and floods to coastal areas from Mexico to storm-battered Louisiana.

It was traveling north-northwest at five miles on a forecast track to pass near the South Texas coast later Monday, then move onshore along the coast of south or central Texas by Monday evening.

Several schools in the Houston and Galveston area were closed Monday because of the incoming storm.

Nicholas was centred roughly 40 miles southeast of the mouth of the Rio Grande River, and 210 miles south of Port O'Connor, Texas, as of Monday morning.

As of 7:00 a.m., the storm was “moving erratically” just offshore of the northeastern coast of Mexico, the National Hurricane Center said.

A hurricane watch was issued from Port Aransas to Freeport, Texas. Much of the state's coastline was under a tropical storm warning as the system was expected to bring heavy rain that could cause flash floods and urban flooding.

Rainfall totals of 8 to 16 inches (20 to 40 centimeters) were expected along the middle and upper Texas coast with isolated maximum amounts of 20 inches possible.

Other parts of Texas and southwest Louisiana could see five to 10 inches of rain over the coming days.

Nicholas is headed toward the same area of Texas that was hit hard by Hurricane Harvey in 2017.

That storm made landfall in the middle Texas coast then stalled for four days, dropping more than 60 inches of rain in parts of southeast Texas.

Harvey was blamed for at least 68 deaths.