Schools get the brunt of latest COVID wave in South Carolina 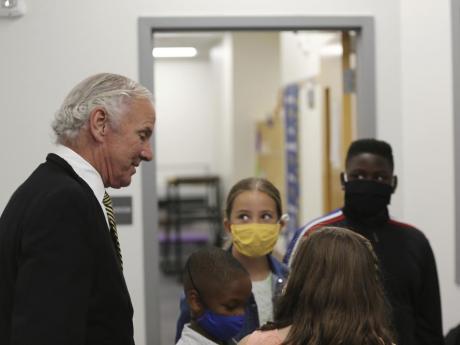 Camden Elementary School students in masks listen as South Carolina Governor Henry McMaster talks to them on Wednesday, September 15, 2021, in Camden, South Carolina. McMaster has adamantly and repeatedly come out against requiring face masks in schools even as the average number of daily COVID-19 cases in the state has risen since early June. AP Photo/Jeffrey Collins)

COLUMBIA, S.C. (AP) — In the past few weeks, South Carolina has set records for COVID-19 hospitalisations and new cases have approached peak levels of last winter.

Since ending South Carolina's state of emergency on June 7, Republican Governor Henry McMaster has maintained that parents alone should decide if children wear masks in schools, even as the state's new cases soared from 150 a day on average to more than 5,000.

“We spiked the football too early. Instead of continuing to listen to medical professionals and interpreting the data, he has been guided by Republican Governors Association talking points,” Democratic state Senator Marlon Kimpson of Charleston said of McMaster.

The Republican-dominated Legislature added the provision that effectively stopped most school mask mandates despite guidance from their own state health and education officials, who have said the statewide mask ban in schools took away one of their best tools to stop the spread of COVID-19.

Now teachers, students and parents are struggling with the fallout as more young people contract the delta variant, forcing nearly two dozen schools and two entire districts — a number that shifts daily, usually upward — back to online learning within a month of returning in person.

Teacher Nicole Walker said a ripple goes through classes at her high school each time the phone rings and a student is sent to the nurse: Does their friend have COVID-19? Will they have to quarantine? The disruptions breed fear and uncertainty in the classroom, she said.

“This is one of those times where the adults should've risen to the occasion and been able to do the right thing and really been able to create an environment where kids felt more safe,” Walker said.

“We have failed them miserably, in my opinion.”

Now the educators talk about how districts aren't providing protective equipment in classrooms and how more teachers are quitting just weeks into the school year, leaving more students crowded into classrooms.

Alison Harding noted those full classrooms and the few second graders wearing masks when she dropped off her son for his first day at Daniel Island School in Charleston last month.

The seven-year-old has a neuromuscular disease, uses a wheelchair and needs devices to help him breathe.

She pulled him out of school the next day.

Now he is waiting at home for the district to provide educational services because she can't risk him getting the virus, particularly as the state hit nearly 2,600 COVID-19 patients hospitalised in early September, a record.

“If the hospitals are full, it's not a good time for him. He shouldn't be going. It's dangerous,” Harding said.

Much of the conflict surrounds the mask rule.

Though not an outright ban, the proviso prevents school districts from using state money to enforce a rule requiring masks.

Nearly every person at a school has their salaries paid with some state money.