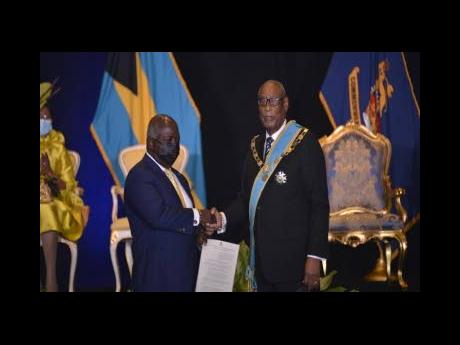 Prime Minister Phillip ‘Brave’ Davis on Saturday received his instrument of appointment, less than 24 hours after he was sworn into office during a private ceremony at the Office of the Governor General on Friday.

Governor General Sir Cornelius A. Smith presented Davis with the instrument during a ceremony at the Baha Mar, a hotel in the capital.

“The people of The Bahamas have spoken. They have spoken loudly and clearly. They have chosen Prime Minister Davis and his party to run the ship for the next five years,” Sir Cornelius said, congratulating Bahamians and calling on them to recognise that there is only one Bahamas.

“My only prayer and wish for you first of all, is that you have success, that my government in all deliberation have success and that the Almighty God continues to faithfully bless our country,” the head of state told Davis, who also thanked Bahamians “who turned out and voted resoundingly for change.

Davis led the PLP to a convincing 32-7 victory for control of the 39-seat Parliament on Thursday, reversing the 2017 results when the party was trounced by the FNM by a 35-4 margin.

Davis pledged that his government will partner with the Bahamian people, saying “no government can do great things on its own.

“We’re going to listen. We’re going to consult widely and we’re going to bring people together. This is the best way to make progress as a nation. No leader or no government should be isolated from the people.

“I also wish to lift the veil of secrecy of which has gone before us, so that all of the arrangements under which we have to live are transparent and those who offered them are accountable. We will govern in the interest of all Bahamians, not just the privileged few.”