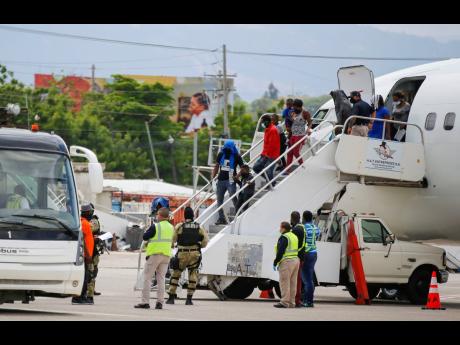 Joseph Odelyn
Haitians who were deported from the United States deplane at the Toussaint Louverture International Airport, in Port au Prince, Haiti, yesterday.

The United States acted Sunday to stem the flow of migrants into Texas by blocking the Mexican border at an isolated town where thousands of Haitian refugees set up a camp, and American officials began flying some of the migrants back to their homeland.

About a dozen Texas Department of Public Safety vehicles lined up near the bridge and river where Haitians have been crossing from Ciudad Acuña, Mexico, into Del Rio, Texas, for almost three weeks. Yellow police tape was being used to block them from using a small dam to walk into the US.

A Mexican police officer on the Mexican side of the border said migrants will not be allowed to cross anymore. He would not give his name. But an AP reporter saw Haitian immigrants still crossing the river into the US about 1.5 miles (2.4 kilometres) east of the previous spot. They were later stopped by Border Patrol agents on horseback and Texas law enforcement officials.

As they crossed, some Haitians carried boxes on their heads filled with food. Some removed their pants before getting into the river and carried them. Others were concerned about getting wet.

“Get out of the water,” agents yelled at the migrants who were crossing in the waist-deep river. The several hundred who had successfully crossed and were sitting along the river bank on the US side were ordered to the Del Rio camp. “Go now,” agents yelled.

Migrant Charlie Jean had crossed back into Ciudad Acuña from the camps to get food for his wife and three daughters, ages two, five and 12. He was waiting on the Mexican side for a restaurant to bring him an order of rice.

“We need food for every day. I can go without, but my kids can’t,” said Jean, who had been living in Chile for five years before beginning the trek north to the US. It was unknown if he made it back across and to the camp.

Haitians have been migrating to the US in large numbers from South America for several years, many having left their Caribbean nation after a devastating 2010 earthquake. After jobs dried up from the 2016 Summer Olympics in Rio de Janeiro, many made the dangerous trek by foot, bus and car to the US border, including through the infamous Darien Gap, a Panamanian jungle.

Border Patrol Chief Raul L. Ortiz said Sunday that 3,300 migrants have already been removed from the Del Rio camp to planes or detention centres, and he expects to have 3,000 of the approximately 12,600 remaining migrants to be moved within a day. The rest should be gone within the week, he said. The first three planes left San Antonio for Port-au-Prince on Sunday, with the first arriving in the afternoon.

“We are working around the clock to expeditiously move migrants out of the heat, elements and from underneath this bridge to our processing facilities in order to quickly process and remove individuals from the United States consistent with our laws and our policies,” Ortiz said at news conference at the bridge.

The blockade and deportations marked a swift response to the sudden arrival of Haitians in Del Rio, a Texas city of about 35,000 people roughly 145 miles (230 kilometres) west of San Antonio. It sits on a relatively remote stretch of border that lacks capacity to hold and process such large numbers of people.