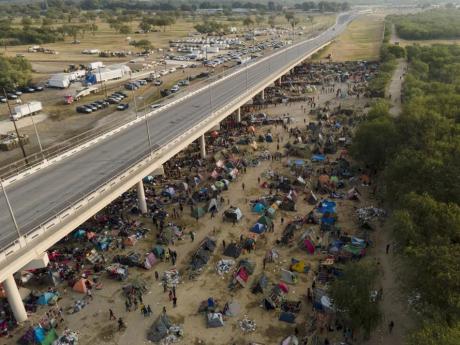 Migrants, many from Haiti, are seen at an encampment along the Del Rio International Bridge near the Rio Grande, Tuesday, September 21, 2021, in Del Rio, Texas. The options remaining for thousands of Haitian migrants straddling the Mexico-Texas border are narrowing as the United States government ramps up to an expected six expulsion flights to Haiti and Mexico began busing some away from the border. (AP Photo/Julio Cortez)

DEL RIO, Texas (AP) — The options remaining for thousands of Haitian migrants straddling the Mexico-Texas border are narrowing as the United States government was ramping up expulsion flights to Haiti on Tuesday and Mexico began busing some away from the border.

More than 6,000 Haitians and other migrants had been removed from an encampment at Del Rio, Texas, US officials said Monday as they defended a strong response that included immediately expelling migrants to their impoverished Caribbean country and faced criticism for using horse patrols to stop them from entering the town.

That was enough for some Haitian migrants to return to Mexico, while others struggled to decide on which side of the border to take their chances.

Jean Claudio Charles, 34, his wife and their 1-year-old son were stretching at dawn on Tuesday after sleeping on cardboard in a park by the river with 300 others who chose to return to Mexico from the US side, some for fear of being deported and others because of a lack of food.

Charles said he did not want to leave the area, which is gradually becoming a new camp on the Mexican side, for fear of arrests.

“They are grabbing people, they bother us, especially Haitians because they identify us by skin,” he said.

On Monday, US Department of Homeland Security Secretary Alejandro Mayorkas conceded it was a “challenging and heartbreaking situation,” but he issued a stark warning: “If you come to the United States illegally, you will be returned. Your journey will not succeed, and you will be endangering your life and your family's life.”

Mexico's Foreign Relations Secretary, Marcelo Ebrard, said Tuesday he had spoken with his US counterpart, Antony Blinken, about the Haitians' situation.

Ebrard said most of the Haitians already had refugee status in Chile or Brazil and most weren't seeking it in Mexico.

“What they are asking for is to be allowed to pass freely through Mexico to the United States,” Ebrard said.

On Monday, officials from Mexico's National Human Rights Commission walked among the migrants signing up those interested in applying for asylum in Mexico.

So far this year, more than 19,000 Haitians have opted to do so, including some now at the border.

At the same time, Mexican authorities were detaining some migrants. The first busloads pulled out Sunday and more empty buses arrived Monday.