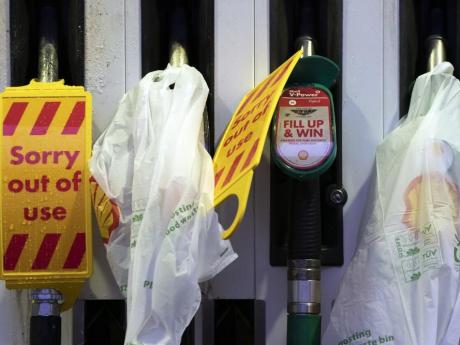 Closed pumps are seen on the forecourt of a petrol station that has run out of fuel after an outbreak of panic buying in the UK, in Manchester, England, Monday, September 27, 2021. British Prime Minister Boris Johnson is said to be considering whether to call in the army to deliver fuel to petrol stations as pumps ran dry after days of panic buying. ( AP Photo/Jon Super)

LONDON (AP) — Lines of cars formed at British gas stations for a fourth day on Monday, as the government mulled sending in the army to help ease the supply disruptions, triggered by a shortage of truck drivers.

As unions called for emergency workers to be given priority for fuel supplies, Petrol Retailers Association chairman Brian Madderson said training had been taking place “in the background” for military personnel to drive tankers.

The government said it had “no plans at the moment” to deploy troops, but was making preparations just in case.

Government ministers were meeting Monday to discuss the fuel squeeze.

The Petrol Retailers Association, which represents almost 5,500 independent outlets, said Sunday that about two-thirds of its members had run out of fuel, as the truck driver shortage set off rounds of gas panic-buying.

Long lines of vehicles have formed at many gas stations around Britain since Friday, causing spillover traffic jams on busy roads.

Tempers have frayed as some drivers waited for hours.

The Conservative government insisted the UK had “ample fuel stocks,” and blamed the problems on consumer behaviour.

“The only reason we don't have petrol on the forecourts is that people are buying petrol they don't need,” said Environment Secretary George Eustice.

Critics urged the government to solve the fuel shortage problem quickly so it does not have damaging spillover effects on health care, police operations and other crucial sectors.

Dr. Chaand Nagpaul at the British Medical Association said health care workers and other essential services staff should be “given priority access to fuel so they can continue their crucial work and guarantee care to patients.”

Christina McAnea, general secretary of the Unison trade union, said the government should use its emergency powers to designate gas stations for emergency workers only.

“Ambulance crews, nurses, care workers, teaching assistants, police staff and other key workers mustn't be left stranded or forced to queue for hours simply to get to a pump,” she said.

The haulage industry says the UK is short as many as 100,000 truckers, due to a perfect storm of factors including the coronavirus pandemic, an ageing workforce and an exodus of foreign workers following Britain's departure from the European Union last year.

Post-Brexit immigration rules mean EU citizens can no longer live and work visa-free in Britain, as they could when the UK was a member of the bloc.