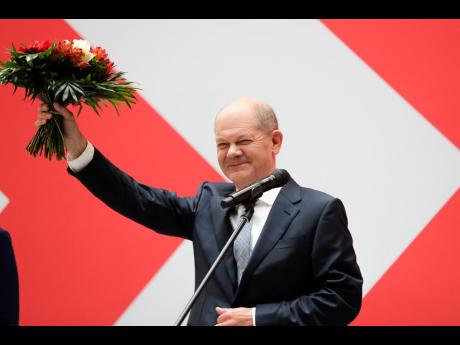 AP
Olaf Scholz of the Social Democratic Party, top candidate for chancellor, holds a bunch of flowers after a press statement at the party’s headquarter in Berlin, Germany, yesterday.

The party that narrowly beat outgoing German Chancellor Angela Merkel’s bloc pushed on Monday for a quick agreement on a coalition government, but Europe’s biggest economy could still be in for weeks of uncertainty after an election that failed to set a clear direction.

Olaf Scholz, the candidate of the centre-left Social Democrats, called for Merkel’s centre-right Union bloc to go into opposition after its worst-ever result in a national election. Both parties finished with well under 30 per cent of the vote, and that appeared to put the keys to power in the hands of two opposition parties – raising questions over the stability of a future government.

Armin Laschet, the Union’s candidate, rejected the idea that the election gave any party a clear mandate and made clear he still hopes to lead a new government. But he sounded considerably less confident on Monday than he did a day earlier, when he said his bloc would do “everything we can” to form one – and some allies hinted at scepticism that would happen.

Whoever becomes chancellor will lead Germany into a new era. During Merkel’s 16 years in office, she was seen abroad not just as Germany’s leader, but in many ways as Europe’s, helping steer the European Union (EU) through a series of financial and political crises and ensuring her country maintained a high profile on the international stage. It remains to be seen whether the next chancellor will match her global standing.

The unclear result, combined with an upcoming French presidential election in April, creates uncertainty — at least for now — in the two economic and political powers at the centre of the EU, just as the bloc struggles with how to counter Russia and China, revamp its relationship with the United States, and address questions about its future from populist leaders in eastern countries.

Scholz, the current finance minister and vice-chancellor, pulled his party out of a long poll slump to win on Sunday. Laschet, the governor of North Rhine-Westphalia state, stumbled in a campaign that was strewn with missteps.

But the kingmakers are likely to be the two prospective junior partners in any coalition, the environmentalist Greens and the business-friendly Free Democrats. The Greens traditionally lean towards the Social Democrats and the Free Democrats toward the Union, but neither ruled out going the other way.

“Voters have spoken very clearly,” Scholz said on Monday. “They strengthened three parties — the Social Democrats, the Greens and the Free Democrats — so this is the visible mandate the citizens of this country have given: These three parties should lead the next government.”